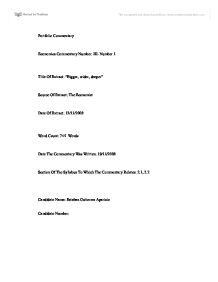 Portfolio Commentary Economics Commentary Number: HL Number 1 Title Of Extract: "Bigger, wider, deeper" Source Of Extract: The Economist Date Of Extract: 13/11/2008 Word Count: 745 Words Date The Commentary Was Written: 19/11/2008 Section Of The Syllabus To Which The Commentary Relates: 2.1, 2.2 Candidate Name: Esteban Gutierrez Aparicio Candidate Number: Politics and the recession Bigger, wider, deeper Nov 13th 2008 From The Economist print edition Tax cuts make a cross-party comeback, thanks to economic woe Illustration by David Simonds HOUSES, financial services, iPods-all sold well during the decade and a half of economic growth that preceded Britain's incipient recession. One thing there wasn't a market for was tax cuts. Labour increased the tax burden to splurge on public services. Far from feeling put-upon, voters spurned offers of lower taxes from the Conservatives at consecutive elections. And the Liberal Democrats saw their vote go steadily up between 1997 and 2005 as they made the case for higher taxes. Yet such are the political changes being wrought by the downturn-the most profound of which remains the revival of Gordon Brown's premiership-that soon all three parties could be standing on tax-cutting platforms. The pragmatic need to stimulate a flagging economy has achieved what years of principled arguments for lower taxes failed to do. At a G20 meeting in Washington on November 15th, Mr Brown is expected to seek agreement from other leaders on the need for an international round of tax cuts. ...read more.

Yet the political winners and losers may emerge more quickly. For Mr Brown, a successful G20 and PBR would accelerate the momentum he has gained from his handling of the economic crisis and Labour's surprisingly comfortable by-election victory in Glenrothes on November 6th. But his rhetoric has raised the stakes. As he has promised to be radical in boosting demand, anything less than a big tax cut may fall flat. Already the government has had to cool speculation that a �15 billion ($23 billion) cut is in the pipeline, after Robert Chote, director of the Institute for Fiscal Studies, a think-tank, said such a sum might be required. The Tories are also poised precariously. If their targeted and funded tax cuts prove wiser in the long-term than more eye-catching alternatives, it may transform the current reputation of George Osborne as a shadow chancellor given more to political tactics than to economic strategy. But with Labour doing less badly in the polls, the Tories may not be able to spurn chances for short-term glory. Business is hardly ablaze with enthusiasm for their NI proposal, and much of the party longs for bigger cuts. What makes the emerging battle all the more gripping is that the protagonists are defending positions contrary to their recent instincts. Mr Brown, whose self-styled prudence led him to deplore Tory tax-cut pledges for a decade, boasts about taking Britain deeper into the red to leaven a recession. ...read more.

The consent for tax cuts has become unavoidable with the rise on the impacts of the recession. The issue is henceforth, which of the proposed programs is more viable? The economic theory suggests that both are feasible. Nevertheless if the Conservative plans on tax cuts do not offer a long-termed guarantee that ensures that in the future there won't be sharp increases on taxes as predicted, then, it might not be applicable. And as for the Liberal Democrat Plan, if it doesn't demonstrate a good control for future rises in inflation derived from a long-term increase in interest rates threatening economic recovery, it can't be used as a reliable mean. And even though the government has already announced that a cut of about $23 billion is projected as a mean of handling the economic crisis, not knowing which of the plans will be adopted by the government, it is not possible to determine how effective the tax cuts will be as an alternative mean of helping with the economic recovery. 1 Are government actions through which taxes are imposed. 2 A fee levied by the government on a particular activity. 3 It is an institution which buys, organizes and/or hires factors of production to produce and sell goods and services. 4 It is a form of taxation related to social security benefits in the United Kingdom. 5 An indicator which measures a nation's income within its geographic boundaries. ?? ?? ?? ?? ...read more.