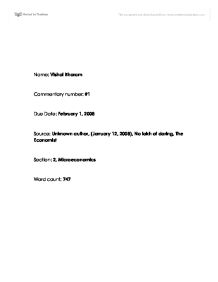 Economics commentary. The article talks about the launching of the cheapest car ($2500 U.S only) in the world by Tata Motors, by the name Nano. In this commentary I will analyze its effects on demand[1], supply[2], externalities[3] and price[4].

Name: Vishal Bharam Commentary number: #1 Due Date: February 1, 2008 Source: Unknown author, (January 12, 2008), No lakh of daring, The Economist Section: 2, Microeconomics Word count: 747 The article talks about the launching of the cheapest car ($2500 U.S only) in the world by Tata Motors, by the name "Nano". In this commentary I will analyze its effects on demand1, supply2, externalities3 and price4. According to the law of demand5 ceteris paribus6, the launch of Nano in to the car market in India is expected to create a huge increase in demand because the lower middle class will start buying this car. An increase in demand will lead to a shift of the original demand curve7 (D) to the right (D') (refer figure 1). Nano market E The increase in demand will attract Tata (the producer8) ...read more.

The price of the Tata Nano being unique for cars makes it hard to decide what a substitute for this car is. Other car companies in India like Hyundai, Suzuki, Toyota and Chevrolet will suffer with the launch of "Nano" as the demand for their cars will decrease. In order to remain in the market, also called Buyers market12, these companies will reduce their current car prices and will try to introduce cheaper vehicles. This will lead to increase in its supply. The demand for two wheelers in India will decrease, as people will prefer buying "Tata Nano" by paying a little more. Petrol being the strongest compliment13 of cars will become extremely costly as the demand for it will increase but as supply is pretty much constant or it will decrease with time because petrol is a scarce fossil fuel. ...read more.

1 Amount people are prepared to buy under specific circumstances such as the products price 2 Amount that firms are prepared to sell under specified circumstances 3 Third party effects arising from production and/or consumption of goods 4 Value of a substance 5 Negative relationship between the price of a good and the quantity demanded 6 Everything else remaining the same 7 Willingness to pay 8 People who make and sell the good 9 Willingness to accept 10 Point where the demand and supply curve meets 11 People who buy the good 12 Consumer dominated market 13 Two goods related such that demand for one falls when the price of other increases 14Quantity demanded is very responsive to change in price 15 Sum of personal consumption expenditures, government purchases of goods and services, investment expenditures, and net exports 16 Expensive and luxurious goods which are bought by rich people ?? ?? ?? ?? ...read more.