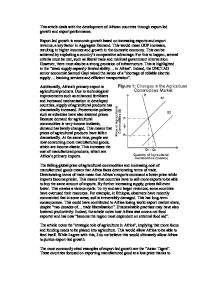 Economics Commentary. This article deals with the development of African countries through export-led growth and export performance.

This article deals with the development of African countries through export-led growth and export performance. Export-led growth is economic growth based on increasing exports and export revenue, a key factor in Aggregate Demand. This would mean GDP increases, resulting in higher incomes and growth in the domestic economy. This can be achieved by exploiting a country's comparative advantage. For this to happen, several criteria must be met, such as liberal trade and minimal government intervention. However, there must also be a strong provision of infrastructure. This is highlighted in the "weak supply capacity-limited ability... in Africa". Indeed, the UNCTAD senior economist Samuel Gayi raised the issues of a "shortage of reliable electric supply ... banking services and efficient transportation". Additionally, Africa's primary export is agricultural products. Due to technological improvements such as enhanced fertilisers and increased mechanisation in developed countries, supply of agricultural products has dramatically increased. ...read more.

For example, in Ethiopia, observers have recently commented that in some areas, soil is irreversibly damaged. This has long-term consequences. This could have contributed to Africa losing world export market share, despite "two decades of... trade liberalisation". Unsustainable practises may have also lowered productivity. Indeed, the article notes how Africa was once a net food exporter and has now "become the region most dependent on external food aid". The article notes the "strategic role of agriculture in Africa", implying that more focus and funding needs to be placed into agriculture. This would allow Africa to be able to feed itself. While I agree with this, I do not believe this would ultimately allow Africa to pursue export-led growth. The most commonly cited examples of export-led growth are the "Asian Tigers". These countries focused on exporting manufactured good at a low price thanks to their comparative advantage of low-cost, low skill labour. ...read more.

This would make export-led growth more feasible, as well as improving the quality of life for millions. For example, people as well as industry could have access to clean water. However, this strategy is not without its problems. This plan would not solve food problems. What needs to be done instead is development of both the Primary and Secondary Sector. This would allow African countries to supply their own agricultural needs and not rely on food imports and aid. Money spent on buying foodstuffs could be used to further increase infrastructure. In conclusion, to pursue export-led growth, Africa needs substantial investment in infrastructure, as well as renewed efforts to improve agricultural performances. This can be achieved by reliving debt, or waiving it all together. This would allow governments to invest the money, for example in infrastructure. These strategies would reverse "worrisome trends" and help Africa develop. 1 Source: Make Poverty History, Geraldine Bedell, Penguin Books, 2005 ?? ?? ?? ?? ...read more.