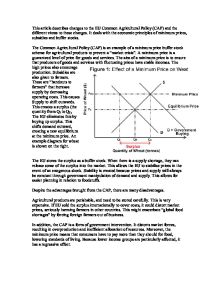 Economics Commentary. This article describes changes to the EU Common Agricultural Policy (CAP) and the different views to these changes. It deals with the economic principles of minimum prices, subsidies and buffer stocks.

This article describes changes to the EU Common Agricultural Policy (CAP) and the different views to these changes. It deals with the economic principles of minimum prices, subsidies and buffer stocks. The Common Agricultural Policy (CAP) is an example of a minimum price buffer stock scheme for agricultural products to prevent a "market crisis". A minimum price is a guaranteed level of price for goods and services. The aim of a minimum price is to ensure that producers of goods and services with fluctuating prices have stable incomes. The high prices also encourage production. Subsidies are also given to farmers. These are "handouts to farmers" that increase supply by decreasing operating costs. This causes Supply to shift outwards. This creates a surplus (the quantity from Q1 to Q2). ...read more.

This might exacerbate "global food shortages" by forcing foreign farmers out of business. In addition, the CAP is a form of government intervention. It distorts market forces, resulting in overproduction and inefficient allocation of resources. Moreover, the minimum price means that consumers have to pay more than they should for food, lowering standards of living. Because lower income groups are particularly affected, it has a regressive effect. Without the CAP, resources supporting inefficient farming would be allocated to more important needs, based on market forces. This would prevent unnecessarily high food prices. Additionally, goods and service that people want can be made more available. 40% of the EU's �100 billion-plus budget goes toward the CAP. Because the EU is a group of highly developed countries, most economic activity is unlikely to be in the Primary Sector. ...read more.

This means buffer stocks are not as useful as they once were. "Cutting red tape around aid payments" would also help deal with the "global food shortages". By assisting foreign governments, the EU can also build strategic alliances. Because of the above mentioned reasons, the CAP has an overall negative impact. The best solution would be to "plans aimed at slashing handouts to farmers". However, it is likely that because of the "decades-old system of EU farm subsidies" EU farmers are no longer competitive. If subsidies were cut, European farmers may find difficulty competing against foreign farmers. What the EU should do is slowly wean farmers off the CAP by reducing subsidies and the minimum price regularly. This would allow them to get used to a more competitive environment. Money saved could then be spent on research into improving efficiency to boost crop yields. This would fulfil the aim of reforms ensuring "European farmers will produce more and better products." ...read more.