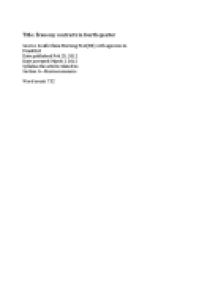 Economics commentary. This article is about the performance of Germanys economy in the coming year after being affected by the global economic crisis in 2009

﻿Title: Economy contracts in fourth quarter Source: South China Morning Post(HK) with agencies in Frankfurt Date published: Feb 25, 2012 Date accessed: March 2 2012 Syllabus the article related to: Section 3?Macroeconomics Word count: 732 ________________ This article is about the performance of Germany?s economy in the coming year after being affected by the global economic crisis in 2009, and how GDP changes in relation to consumption, exports and also public deficit. Gross domestic product (GDP) is the value of all final goods and services produced within an economy annually; stagnation is when growth in the real GDP is negligible (less than 2-3%) and is sometimes used to describe low trading volume. Due to the global economic crisis, European countries cut their spending on domestic and foreign goods. Germany is affected since most of its goods are exported to Europe. Private consumption within Germany also decreased, dragging GDP down by 0.2% in the forth quarter of 2011. ...read more.

But this would increase public deficit, leaving Germany to either decreases public deficit or improves economic growth. Since it is a member of the Eurozone and its deficit to GDP ratio must be lower than 3% or it will face penalty, it seems rational to continue its efforts to reduce its deficit. Yet, because its debt-to-GDP ratio is quite low, an economic growth is more desirable such that the resulting deficits will be paid for by an expanded economy if expansionary policy is employed. Germany can also consider diversifying the market of its domestic products such that net exports increases, ensuring a stable export performance and reducing the effect of shocks from external demands. German producers can expand their market to some developing countries to their expand income sources. Emerging economies, such as India and China, are dependent on commodity products but also have the buying ability especially for goods with better quality. By increasing the competitiveness of their products, such as price and after-sales service, German firms can compete with producers from non-Europe region. ...read more.

Europe's fiscal turmoil has forced governments and consumers across the 17-nation euro economy to rein in spending, damping demand for German goods in its biggest export market. Europe's largest economy may avoid a recession, defined as two successive quarters of declining GDP. "The German economy is in a soft patch that it is going to overcome," said Gerd Hassel, an economist at BHF Bank in Frankfurt. "The fundamentals of the economy are different from countries like Spain and Italy. They're basically sound." The GDP data published yesterday shows that the contraction in activity was mainly due to a 0.8 per cent drop in exports, traditionally the main driver of growth in Germany's economy. Economists now expect the economy to stagnate in the first quarter of this year, dodging the two quarters of negative growth which define a recession, before recovering from the second quarter. After emerging from the 2009 recession with a record 3.7 per cent growth in 2010 and 3 per cent growth last year, the Bundesbank predicts the German economy will expand 0.6 per cent this year. This is compared with Italy's 1.3 per cent. ...read more.