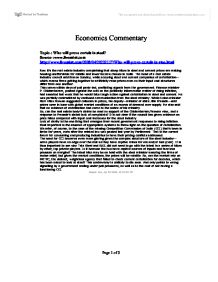 Economics Commentary Topic-: Who will prove cartels in steel?

Economics Commentary Topic-: Who will prove cartels in steel? Source-:www.livemint.com http://www.livemint.com/2008/04/20232117/Who-will-prove-cartels-in-stee.html Now it's the real estate industry complaining that steep hikes in steel and cement prices are making housing unaffordable for middle and lower income classes in India. The head of a real estate industry council said this on Sunday, while accusing steel and cement companies of cartelization- which means firms getting together to artificially raise prices even as their input cost structures differ from one another. This comes within days of poll panic-led, conflicting signals from the government. Finance minister P. Chidambaram, pushed against the wall on the politically inflammable matter of rising inflation, had asserted last week that he would take tough action against cartelization in steel and cement. He was partially contradicted by confused communication from the steel ministry. While Union minister Ram Vilas Paswan suggested collusion in prices, his deputy-minister of state Jitin Prasada-said prices were in tune with global market conditions of an excess of demand over supply. He also said that no evidence of cartelization had come to the notice of his ministry. ...read more.

Posted: Sun, Apr 20 2008. 11:21 PM IST Commentary A cartel is a collusive agreement between firms to restrict output in order to increase profits. In a cartel firms act as a monopoly and have non-price competition. Cartels usually occur in an oligopolistic industry, where there are small number of sellers and firms produce homogenous products. Cartel members may generally agree on price fixing, total industry output, market share, allocation of customers, allocation of territories, big rigging, and establishments of common sales agency. The aim of such collusion is to increase profits by reducing competion. Competition law generally forbids cartels, although cartels do happen but it is not very easy to identify them as companies are amrt enough for not putting the agreement on paper. Cartels are of two types private and public. Export cartels and shipping conferences are examples of public cartel. On the contrary, private cartel is an agreement on terms and conditions where members arrive mutual understanding and is unlikely to be detected by outside parties. ...read more.

This can be shown using a diagram. The diagram shows that there is a increase in supply from q1 to q2 and there is a reduction in prices from p1 to p2. This will help a firm to maximize its revenue, although they lose out on an opportunity to earn supernormal profits because they have reduced their prices and could only afford to earn normal profits as shown above. But by doing this they can create barriers to entry and reduce the competition. If there is a cartel agreement between the two firms the government can impose a huge fine on the firms for not obeying the government. The government cannot shut the two firms as it would be a huge loss for the nation economically but can force them to either reduce their prices or break the agreement. The government would not encourage formation of cartels as it discourages competition which leads to inefficiency. A government would like to have more competition in a market as it leads to increase in efficiency and lesser prices for consumers. This may also help the government to keep control over the inflation levels. ?? ?? ?? ?? Page 1 of 3 ...read more.