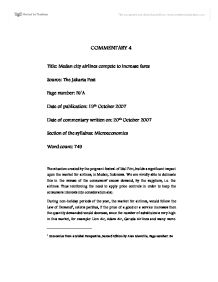 COMMENTARY 4 Title: Medan city airlines compete to increase fares Source: The Jakarta Post Page number: N/A Date of publication: 19th October 2007 Date of commentary written on: 20th October 2007 Section of the syllabus: Microeconomics Word count: 749 The situation created by the poignant festival of Idul Fitri, builds a significant impact upon the market for airlines, in Medan, Indonesia. We are vividly able to delineate this in the misuse of the consumers' excess demand, by the suppliers, i.e. the airlines. Thus reinforcing the need to apply price controls in order to keep the consumers interests into consideration also. During non-holiday periods of the year, the market for airlines, would follow the Law of Demand1, ceteris paribus, if the price of a good or a service increases then the quantity demanded would decrease, since the number of substitutes is very high in this market, for example: Lion Air, Adam Air, Garuda Airlines and many more. ...read more.

Thus, in Medan, we can see that the Airline services are taking advantage of this inelastic situation of the demand to increase their own revenue. An inelastic situation would mean that even if there is an amount of increase in price it will lead to no change in the quantity demanded. Moreover it can be said that, there is an excessive demand created due to the festival of Idul Fitri and "extended holidays" and due to this excessive demand for the service, and the constant supply for it (as there are no increase in the number of flights), it makes the situation advantageous for suppliers and they seem to be taking advantage of their consumers by increasing prices extravagantly. This is highlighted in the article when said, "Fares might increase up to 50%" and the "airlines were violating the regulation by offering their cheapest tickets at Rp.700, 000 per person." ...read more.