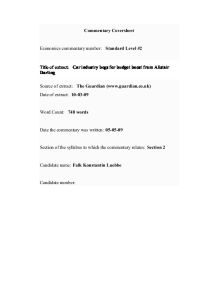 Commentary Coversheet Economics commentary number: Standard Level #2 Title of extract: Car industry begs for budget boost from Alistair Darling Source of extract: The Guardian (www.guardian.co.uk) Date of extract: 10-03-09 Word Count: 748 words Date the commentary was written: 05-05-09 Section of the syllabus to which the commentary relates: Section 2 Candidate name: Falk Konstantin Luebbe Candidate number: Car industry begs for budget boost from Alistair Darling 07/04/09 - guardian.co.uk Manufacturers and dealers want UK to follow Europe into scheme to give cash to drivers who scrap old cars to buy new The government was facing renewed pleas to bail out Britain's ailing motor industry yesterday as figures showed sales of new cars had dropped by almost a third year on year. Only 313,912 cars were registered in March - a 30.5% fall in sales from this time last year, figures from the Society of Motor Manufacturers and Traders (SMMT) showed, prompting fresh calls for the government to pay motorists to trade in their old cars for new ones. The motor industry and lobby groups are hoping this month's budget will include a scrappage scheme, under which car owners are given a financial incentive of about �2,000 to swap their old vehicle for a new greener model. Treasury officials have told the industry they are seriously considering including such a stimulus in the budget a fortnight tomorrow although ministers publicly insist that no decision has been taken. ...read more.

A vehicle-scrappage scheme has the potential to reduce emissions, reduce accidents and their severity whilst giving a boost to the UK motor industry. There are many benefits from getting older gross polluters off the road." But green groups counselled against introducing such a scheme. Peter Lipman, policy director at Sustrans, the sustainable transport charity, said it would be "a really, really bad idea, wherever the money is coming from". "There are so many better ways of spending government money if you are trying to deal with both the recession and climate change," he added. The RAC motoring strategist, Adrian Tink, said: "The introduction of any car-scrappage scheme needs to be contingent on balancing the economic benefits with a concern for the environment. The scheme needs to be as much about getting old, high-polluting cars off the road as it is about stimulating car sales." The dire sales figures bode ill for the economic recovery because new car sales are seen as a key indicator of consumer confidence. When the UK went into recession in the early 1990s, new car registrations dropped for 27 successive months. At one point, sales that had reached an annual peak of 2.3million in the late-1980s dipped as low as 1.5million. IB Economics: Internal Assessment Commentary Car industry begs for budget boost from Alistair Darling The article "Car industry begs for budget boost from Alistair Darling" found on the web page of The Guardian discusses the effects of the current recession on the car industry, particularly in the UK. ...read more.

Of course production will decrease what will cause cyclical employment but to a certain extend production will be kept up to occupy the workers. The term cyclical unemployment can be defined as occurring when the economy is growing more slowly than estimated as the demand for labour is interdependent on the demand for goods and services. This situation can't be kept up for long because firms lose money spending more money on workers they try to keep than actually gaining through sales and go bankrupt if the recession doesn't end or if they are not being subsidized by the government. Hence the motor industry searches for ways of pushing demand. A possible solution could be the scrappage scheme which encourages motorists to swap their old cars against new ones by giving the buyer about 2000� directly. The effect of the scheme on the demand for cars can be seen on the following diagram: Demand rises again due to the encouragement and shifts the demand curve to the right again. Concluding one can say that the law of supply and demand is displayed in the real world. In the article "Car industry begs for budget boost from Alistair darling" it is clearly shown how recession can affect the demand for cars and how therefore demand for labour interdepends on demand for, in this case, cars. Furthermore it can also be stated that things like the scrappage scheme can encourage demand again. ...read more.