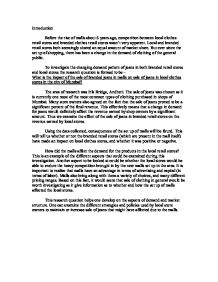 Introduction Before the rise of malls about 6 years ago, competition between local clothes retail stores and branded clothes retail stores wasn't very apparent. Local and branded retail stores both seemingly shared an equal amount of market share. But ever since the set up of shopping, there has been a change in the demand of clothing of the general public. To investigate the changing demand pattern of jeans in both branded retail stores and local stores the research question is formed to be - What is the impact of the sale of branded jeans in malls on sale of jeans in local clothes stores in the city of Mumbai? The area of research was Irla Bridge, Andheri. The sale of jeans was chosen as it is currently one most of the most common types of clothing purchased in shops of Mumbai. Many store owners also agreed on the fact that the sale of jeans proved to be a significant percent of the final revenue. This effectively means that a change in demand for jeans would definitely affect the revenue earned by shop owners by a significant amount. Thus we examine the effect of the sale of jeans in branded retail stores on the revenue earned by local stores. Using the data collected, consequences of the set up of malls will be found. This will tell us whether or not the branded retail stores (which are present in the mall itself) ...read more.

For example, discounts and free gifts were offered with a certain number of purchases. This would convince consumers to buy their goods. Another pricing strategy used was in fact the type of pricing. It is called psychological pricing. This is basically when the price of a product is kept just under the desired whole number value. For example, when a product is worth Rs. 600, the shop owner would price his product at Rs. 599. This gives the impression to the customer that product in the range of Rs. 500 and not Rs. 600. Thus, by reducing the price by a small amount, the owners influence the consumer into thinking that it is cheaper. Methodology - There were 6 small retail stores in the area of research that sold jeans whereas there was 1 multi branded shop in the entire mall that sold jeans. The six retail stores have similar types and styles of jeans whereas on the other hand, the shop in the mall had a particular and unique style of jeans. The general price trend was that prices of jeans sold in the shop (in the mall) were higher than that of those products sold in the small retail stores. For primary research, a questionnaire was carried out among a random sample of consumers or potential consumers in and around the area. Also, a series of questions were asked to various shop owners regarding the change in sales after the mall had been setup in the area. ...read more.