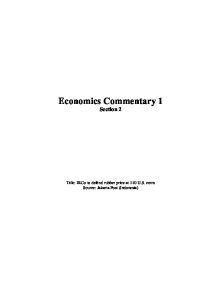 Economics Commentary 1 Section 2 Title: IRCo to defend rubber price at 110 U.S. cents Source: Jakarta Post (Indonesia) We are to explore how rubber is unstable in prices, such as the 2001 crash in rubber price to a 30-year low as mentioned in the article. The buffer stock scheme that the three major rubber producing countries are preparing to establish to stabilize the dropping price of rubber will also be evaluated. Prices of agricultural goods tend to be unstable. Rubber is a necessity good, so it has inelastic demand. Secondly, short run supply is inelastic due to long production periods. Thus prices tend to fluctuate to a large degree as quantity demanded and supplied are both insensitive to price change. Lastly, rubber supply is susceptible to sudden changes, e.g. weather, so the supply curve may shift outward or inward due to changing harvests as shown in the diagram below. Thus in combined effect the price of rubber tends to fluctuate vastly given small but frequent shifts in supply, which means the income of farmers varies greatly. ...read more.

to impose a buffer stock scheme. It is the buying and holding of rubber during excess supply and selling it during excess demand so as to fix the price at 110 US� per kilogram. When the supply increases, e.g. due to more suppliers, CSMO buys and holds excess supply of rubber, creating an artificial demand. This raises the market price back to or above 110�, the preference price. During low supply of rubber, e.g. due to crop failure, CSMO will then sell the held rubber, creating artificial supply, to push the price lower to 110�. Rubber market with buffer stock scheme Prubber S' S S'', When S�, D --> D' When Sv, S' --> S _ excess DD P (fixed P @ 110�) excess SS D D' q Qrubber (kg) This measure is beneficial to the rubber farmers as their incomes are always maintained at the grey area. Also, since rubber is a major export and 91% of the rubber produced in Indonesia is exported, this acts as a form of protectionism, to protect the less competitive home industry from lower costing world rubber. ...read more.

executive director Soeharti Honggokusumo on Friday. Soeharti said that the committee would meet on Monday in Bangkok to discuss the details of the plan. The three countries formed a grouping called the International Rubber Consortium Limited (IRCo) last year in a bid to push rubber prices higher. IRCo, which then set up the CSMO, has sufficient funds to undertake market operations. According to Soeharti, the planned measure was part of the effort to avoid any reoccurrence of the traumatic event of 2001, when the rubber price crashed to a 30-year low of 45 cents. The price bounced back in late 2002 to reach 130 cents, but has been steadily declining since then to date. The price of the commodity on Friday stood at 112.5 cents, while the highest price in the last ten years was in 1995, when it stood at 155 cents. Indonesia is the second largest natural rubber producer in the world after Thailand. Producing 1.79 million tons in 2003, Indonesia exported 91 percent of national production. ...read more.