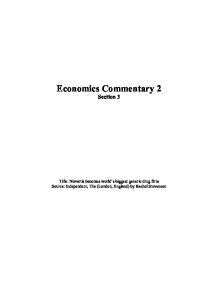 Economics Commentary 2 Section 3 Title: Novartis becomes world's biggest generic drug firm Source: Independent, The (London, England) by Rachel Stevenson In the article, the firm Novartis has taken over two other generic drug producers, namely Hexon and Eon Labs, to form the world's largest generic drug manufacturer. It will be shown that this will lower Novartis's production costs to increase profits, as the article suggests, and also that other parties will be affected in a good way. When it is said the acquisition will allow cost savings by 'bringing it to scale', the firm is having internal economies of scale (EOS) from the result of expansion of the firm. The take over in this case is a horizontal integration, with Novartis buying firms Hexon and Eon in order to acquire them, all three which are in the same production stage in generic drugs. This provides an external growth of the firm as the factors of production are acquired from the taken firms, while it does not expand its scale by investing on these factors which is more costly and takes more time. The average total costs of production (SRAC's) will decrease by expanding the scale of the firm in the long run from increasing productive efficiency, which is called economies of scale. ...read more.

It may even force some firms to exit the market and causes a barrier to the entry of new firms. Acquiring the two big firms will also mean that two major competitors leave the market. However, since the market is highly fragmented, Novartis will still only get a maximum market share of 10%, and thus its power to monopolize or set up high prices is still very limited. Generally, the decrease of generic drug prices will be good for the public as it makes these drugs readily affordable, meaning more people can attain the medical treatment they need. This will also decrease the government's expenditure in medical care as it usually buys in generic drugs, which would now be even cheaper. Clinics will have larger profits as the price of drugs they buy in decrease. Therefore the acquisition of Novartis is justified. As it would enjoy economies of scale through expansion, it could lower the prices as costs are lower. The prices would be lowered in face of competition. It can still have increased profits as costs are reduced. Thus consumers and the firm itself will benefit. February 22, 2005 Independent, The (London, England) First Section: Business Page: 34 Author: Rachel Stevenson "Novartis becomes world's biggest generic drug firm" Novartis is poised to become the world's biggest generic drug maker after agreeing to buy the German company, Hexal, and its US affiliate, Eon Labs, in a cash deal yesterday worth EUR6.4bn (pounds 4.4bn). ...read more.

But shares in Novartis climbed more than 3 per cent in Switzerland yesterday - a sign that investors approved the multibillion-dollar deal. Mark Clark, at Deutsche Bank, said: "Investors should be confident that Novartis is buying robust and profitable businesses with strong combined margins and decent market shares. Novartis now has critical mass in Germany, one of the largest markets for generics.... The deal looks very sensible." Novartis has about $8bn of cash on its balance sheet, and analysts have expected an acquisition for some time. The new power of Novartis in the generics market could spark other takeover deals in the sector, with rivals forced to bulk up to compete. "The generics market is fragmented," Mr. Clark said. "Even by 2010, Novartis expects to have a market share of no more than 10 per cent." Hexal, whose products include a generic version of a cholesterol-lowering drug, had sales of $1.65bn last year and commands the No. 2 spot in Germany. Eon Labs, which sells a version of GlaxoSmithKline's Wellbutrin antidepressant, is expecting to make a $30.2m profit for the last three months of 2004, up 57.3 per cent on the same period last year. Novartis will remain dominated by branded pharmaceuticals. The addition of Hexal and Eon, is expected to push revenues from generic drugs to about 15 per cent of the group's sales, compared with 10 per cent at present. ...read more.