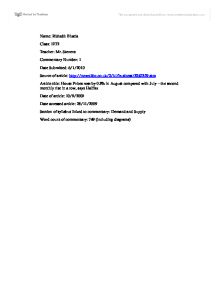 David Smith, of property consultants Carter Jonas, said: "Higher interest rates, when they do come, will result in fewer buyers, which will reduce demand and once again apply downward pressure on prices. The combination of increased supply and reduced demand could catch a lot of people out in 2010." On Thursday, one of the UK's largest housebuilders, Redrow, reported that its sales fell by 54% to �301.8m in the year to the end of June as it sold fewer homes - and those which were bought fetched lower prices. This article shows a rise of 0.8% in the prices of houses available on the UK market, between July and August. Price elasticity of demand (PED) is the responsiveness of quantity demand to a change in price. Factors affecting PED are availability of substitutes and type of good (need or want). In this case, there are no substitutes for the "average UK home" so all forms of housing have been accounted. Generally when a good/service has no substitutes it is inelastic, depending on its importance, because consumers have no choice. Similarly, housing is a necessity, people need a form of shelter - therefore consumers will pay extra money if there are no alternatives. Both these factors are long term because any new forms of housing will be added into the average UK home statistics. ...read more.

The laws of demand state that a consumer will demand more as the prices decrease. This can be seen from this article as demand increased when the average cost of a house decreased - lower interest rates mean that the overall cost of buying a house has decreased. They also state that at a lower price more people can afford to buy the good, as corroborated by the article. The biggest advantage of the price rise in the long run is the wealth effect - an increase in spending that accompanies an increase in perceived wealth. When consumers hear about their house value increasing, they will perceive their wealth to have increased and spend more. This will boost the economy by increasing demand, output and employment - three important factors for growth. It also gives incentive to constructors to build more homes in the hope of increased profits, thus generating even more jobs. Furthermore, increased consumption would cause demand-pull inflation (persistent increase in the average price level in the economy), which in this case is beneficial because UK has continually experienced deflation during the recession. However, a disadvantage of the price is the asset price bubble - it may cause the price of housing to increase further generating more speculation. This may continue till prices are high, then the bubble will burst causing prices to fall - leading to losses for builders and homeowners. However, rents would fall as well, which is better for tenants. ...read more.