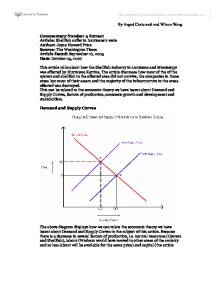 Commentary Number 4 Extract Article: Shellfish suffer in hurricane's wake Author: Joyce Howard Price Source: The Washington Times Article Dated: September 16, 2005 Date: October 25, 2007 This article talks about how the Shellfish industry in Louisiana and Mississippi was affected by Hurricane Katrina. The article discusses how most of the of the oysters and shellfish in the affected area did not survive, the companies in those areas lost most of their assets and the majority of the infrastructure in the areas affected was destroyed. This can be related to the economic theory we have learnt about Demand and Supply Curves, factors of production, economic growth and development and stakeholders. Demand and Supply Curves The above diagram displays how we can relate the economic theory we have learnt about Demand and Supply Curves to the subject of this article. Because there is a decrease in several factors of production, i.e. natural resources (Oysters and Shellfish), labour (Workers would have moved to other areas of the country and so less labour will be available for the same price) and capital (the article states that "extensive damage occurred to the whole seafood industry's infrastructure, including harvesting vessels, docks and processing facilities"), ...read more.

Capital will become scarce as the capital (machinery, boats, factories) of several companies in the shellfish industry may have been completely destroyed as a result of the hurricane. Economic Growth & Development Taking economic theory of economic growth and development into account, this article indicates that Hurricane Katrina is going to severely effect the economic growth and development of the USA. Because there are no more oysters or shellfish in the affected area, most fishermen and employees of companies in the shellfish industry may lose their jobs, this will cause a decrease in the real national income per capita and therefore a decrease in real GDP. The unemployment will lead to less demand for oysters and shellfish and therefore it will then lead to further unemployment as a result of the demand multiplier effect. Relief efforts will also put a strain on tax payers as taxes may increase and therefore the national income per capita and real GDP will fall further. Another effect on the economic growth will be that the oyster firms affected by the hurricane will be less productive and competitive because of rising costs and increasing scarcity of the factors of production, therefore there will be a ...read more.

Consumers - as supply of shellfish and oysters will decrease, consumers will face difficulty finding oysters and the prices will also rise so consumers may not want to pay more for shellfish and oysters and so may resort to substitute goods or look towards cheaper foreign imports. The Government - will face a crisis as rising unemployment will cause problems for the economy and raising taxes won't raise enough money, government expenditure will increase. The government may also have provide aid to fishermen and other workers made redundant from the shellfish industry. The government will also have to work harder and spend more money in order to clean up any pollution caused to the ocean as a result of the hurricane and if undamaged oysters and shellfish are found, they will have to carefully control harvesting of such creatures so as to not wipe out those species from the affected areas of the ocean. Environmental Groups - will have to increase expenditure as they will want to provide aid to animals and people affected by the hurricane. Should a small amount of oysters and other shellfish be found undamaged, they will probably campaign to make sure firms don't exploit these small amounts so as to wipe them all out. ?? ?? ?? ?? By Angad Chaturvedi and Wilson Wong ...read more.