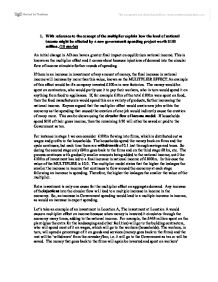 1. With reference to the concept of the multiplier explain how the level of national income might be affected by a new governmentt spending project worth $100 million. (10 marks) An initial change in AD can have a greater final impact on equilibrium national income. This is known as the multiplier effect and it comes about because injections of demand into the circular flow of income stimulate further rounds of spending. If there is an increase in investment of any amount of money, the final increase in national income will increase by more than this value, known as the MULITPLIER EFFECT.An example of this effect would be if a company invested �100m in new factories. The money would be spent on contractors, who would partly use it to pay their workers, who in turn would spend it on anything from food to appliances. If, for example �10m of the total �100m were spent on food, then the food manufacturers would spend this on a variety of products, further increasing the national income. Keynes argued that the multiplier effect would create new jobs within the economy as the spending that caused the creation of one job would indirectly cause the creation of many more. This can be shown using the circular flow of income model. ...read more.

and the rest will be 'withdrawn' from the circular flow, i.e. it will go to the Government as tax or will be saved. The money that goes back to the firms will again be invested and spent on workers' wages and the cycle continues, with each time the households taking a percentage for tax and savings, before passing the money on again. Hence, the cycle continues until all of the initial �468 million has been withdrawn from the cycle. At this point we can divide the total increase in income (i.e. the addition of all the values that have gone through the firms each time) and divide it by the initial investment to calculate the value of the multiplier. In this way the initial investment will not have caused the creation of 2,000 jobs, but many more. 2. With reference to one factor, explain why some factors might shift the SRAS curve but leave the LRAS curve unchanged. (10 marks) The short-run aggregate supply curve captures the relation between real production and the price level. As the price level rises, real production is greater. As the price level falls, real production also declines. The interaction between the short-run aggregate supply curve and the aggregate demand curve, as well as the long-run aggregate supply curve is the core mechanism of the aggregate market (AS-AD) ...read more.