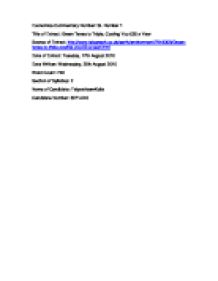 Economics Commentary Number: SL Number 1 Title of Extract: Green Taxes to Triple, Costing You �50 a Year Source of Extract: http://www.telegraph.co.uk/earth/environment/7948309/Green-taxes-to-triple-costing-you-50-a-year.html Date of Extract: Tuesday, 17th August 2010 Date Written: Wednesday, 25th August 2010 Word Count: 748 Section of Syllabus: 2 Name of Candidate: FaiyazAzamKolia Candidate Number: 3071-040 GREEN TAXES TO TRIPLE, COSTING YOU �50 A YEAR Household energy bills will increase by �50 as the impact of green taxes triples over a decade, new research shows. By James Kirkup, Political Correspondent, Published: 12:01AM BST 17 Aug 2010 The sum the Government levies from energy use will rise to more than �16 billion by 2020, a think tank has estimated. Policy Exchange, which has close links to Conservative ministers, calculated that the cost of green taxes, surcharges and other levies on energy will go from �5.7 billion this year to �16.3 billion in 2020. In 2020, some �6.4 billion of the total will come from levies applied to domestic energy consumption. That is up from �2 billion today. The increase will add �40 to the average household gas bill and �8 to an electricity bill, according to data from the Department of Energy and Climate Change. ...read more.

The articles discusses that although 'green taxes' are applied to fund low-carbon power generation with the ultimate aim of encouraging consumers to tap alternative energy, they will increase the cost of household energy bills by �50 by 2020. Externalities are third party effects arising from production and consumption of goods and services for which no appropriate compensation is paid. Negative externalities occur when such production and/or consumption impose external costs on third parties outside of the market for which no appropriate compensation is paid. Households consuming carbon-emitting energy can be considered to be a negative externality as it affects the rest of society and even a nearby country which is outside the 'consumption market'. Many a time, the government will impose a tax on those who create negative externalities attempting to correct market failure. The graph shows negative externality of consumption, where MPB (marginal private benefit) is much higher than MSB (marginal social benefit).The consumption of pollution-emitting energy can be represented by the demand curve MSC (marginal social cost) in the diagram. This curve shows the spillover costs on society with each additional unit of consumption. Consumption is at Q1 and not at the optimal, Q* indicating over consumption leading to welfare loss to society. ...read more.

The government cannot accurately put a monetary value on the private benefits and cost of firms; in fact, a certain financial figure on the value of externalities such as the cost to natural habitat, long-term effects of ozone layer depletion or even that of the human life for that matter, is rather hard to arrive at. All in all, all that the government and other environmental agencies can hope to achieve is the correct direction of movement towards the optimum level of output. A more effective step the government could take is to impose a complete ban on certain forms of energy consumption that produce large quantities of emissions or issue marketable pollution permits. The latter case of Carbon emissions' trading has been gaining momentum in many countries now and is a central feature in Kyoto Protocol and the European Union Carbon Emissions Trading Scheme which started in full in 2005. This new approach involved the issuance of limited volume of pollution rights which are sold to companies that pollute. The incentive is that if the company pollutes less, then they can sell their excess permits in the secondary market. As the number of permits being issued is carefully reduced year by year, total carbon emission can be curbed efficiently and simultaneously the path towards greener energy alternatives can be also be paved. ?? ?? ?? ?? Name of Candidate: FaiyazAzamKolia Candidate Number: 3071-040 6 ...read more.