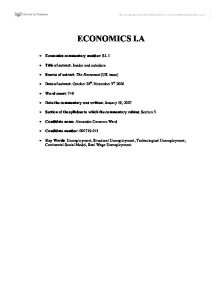 ECONOMICS I.A * Economics commentary number: SL 1 * Title of extract: Insider and outsiders * Source of extract: The Economist (UK issue) * Date of extract: October 28th-November 3rd 2006 * Word count: 749 * Date the commentary was written: January 19, 2007 * Section of the syllabus to which the commentary relates: Section 3 * Candidate name: Alexander Cameron Ward * Candidate number: 000719-041 * Key Words: Unemployment, Structural Unemployment, Technological Unemployment, Continental Social Model, Real Wage Unemployment. France matters and its problems cannot be ignored. France is the world's sixth-biggest economy, boosted by the evermore powerful multinational-firms of the CAC 40 (French stock market index). The nation is a declared nuclear power and responsible for centuries of economic, philosophical, and technological innovation. However, in the last decade France has entered what some may call an era of declinism. Its economy has lost ground: unemployment has reached 10%, the public debt amounts to 66% of GDP (Gross Domestic Product: Value of a country's total output of goods and services before depreciation) ...read more.

* Structural unemployment refers to unemployment resulting from fundamental changes in the economy. * Technological unemployment is the result of technological changes reducing the direct demand for labour. * Real Wage Unemployment has many aspects but is generally caused by government imposed restrictions such as minimum wage for example that are imposed above equilibrium and therefore employers are not willing to offer jobs. * The Continental Social Model is the social model in use in France. It has strict employment regulations and a large amount of directive in industry. Nevertheless, the labour market has proven to be inflexible and slow to react to globalization. However, generous insurance-based unemployment benefits and a well funded welfare state have resulted in a commendable reduction in poverty and the provision of high quality health care. After the 30 years of post World War Two prosperity, more commonly known as the trente glorieuses, France emerged as one of the world's leading industrial powers. ...read more.

The social-security contributions for an employee can cost the employer the equivalent of half that employee's salary. Furthermore, once employees are hired for a full-time job, to dismiss them, even for legitimate reasons, can sometimes be more expensive then keeping them. It is therefore clear that employing someone is a big risk and can lead to the employer developing negative criteria when considering applicants (racial, age and sex discrimination) in other words: negative externalities. To counter the heavy unemployment and general instability in France, the French government is going to have to revise their social model, turning away from the continental model and going towards a more flexible and liberal model like the Danish one: Flexicurity. The Flexicurity social model enables a more flexible job market whilst insuring that those who lose their jobs are still properly protected and can therefore count on employment benefits. Unfortunately, in a country where even the slightest reform is welcomed by mass protest it seems that such a transformation will not be accomplished over night. ...read more.