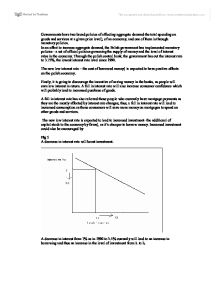 Governments have two broad policies of affecting aggregate demand-the total spending on goods and services at a given price level), of an economy, and one of them is through monetary policies. In an effort to increase aggregate demand, the Polish government has implemented monetary policies - a set of official policies governing the supply of money and the level of interest rates in the economy. Through the polish central bank, the government has cut the interest rate to 3.75%, the lowest interest rate level since 1990. The new low interest rate - the cost of borrowed money) is expected to have positive effects on the polish economy. Firstly, it is going to discourage the incentive of saving money in the banks, as people will earn low interest in return. ...read more.

an increase in the level of investment from I1 to I2 A fall in interest rates is also expected to discourage the incentive of saving as people gain less in return, this will lead increased consumption as consumers spend more on durable goods and services. Increase consumption in the economy is likely to encourage firms increase their output to respond to increased consumption. As firms invest more in order to increase real output, new job opportunities will be created for the people. As more people are employed, there will be an improvement in the incomes of the Polish population and this will thus lead to increased consumption. An increase in real output and consumption in the polish economy will be a big boost to Poland's aggregate demand and hence; the aggregate demand curve will shift to the left. ...read more.

Increased consumption and investment will contribute to Poland's actual output growth, as there will be new jobs hence improving the incomes of the population. Increased employment and investment will be a sign of economic growth. Fig 3 Actual growth will as a result of increased consumption and Investment in the economy The improvement of production from point A in the PPF to point C on the PPF would increase Poland's actual output. This will be a sign of increased national output and a decrease in unemployment level or to say economic growth. A fall in interest rate will also relieve the government itself, since governments pay large amounts of money yearly on their own national debts. Therefore, low interest rate will decrease the cost of government payments which could lead to lower taxes in the long run / in the future. ...read more.