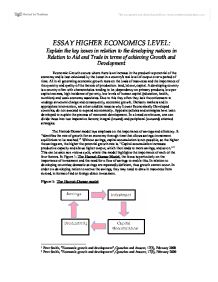 ESSAY HIGHER ECONOMICS LEVEL: Explain the key issues in relation to the developing nations in Relation to Aid and Trade in terms of achieving Growth and Development Economic Growth occurs where there is an increase in the productive potential of the economy and is best calculated by the boost in a country's real level of output over a period of time. All in all generating economic growth rests on the basis of resources and the importance of the quantity and quality of the factors of production: land, labour, capital. A developing country is a country often with characteristics tending to be; dependency on primary products, low per capita incomes, high incidence of poverty, low levels of human capital (education, health, nutrition) and weak economy associates. Due to this they often they lack the enticement to undergo structural change and consequently, economic growth. Derisory markets and in appropriate intervention, are other credible reasons why Lower Economically Developed countries, do not succeed to expand economically. Apposite policies and strategies have been developed to explain the process of economic development. In a broad continuum, one can divide these into two imperative factors; integral (inward) and peripheral (outward) oriented strategies. The Harrod-Domar model lays emphasis on the importance of savings and efficiency. It "identifies the rate of growth for an economy through time that allows savings-investment equilibrium to be reached."1 Without savings, capital accumulation is not possible, so the higher the savings are, the higher the potential growth rate is. ...read more.

These are very small amount of money, as little as 1$ a day handed directly to those in need by an NGO (Non-Governmental organization) and reflects the circumstance in which the recipient is in. In some areas micro-credit schemes are addressing the financial needs of the deprived. The Grameen Bank is the best known example of a micro-credit scheme organization. Development can also create a dual economy. Signifying that one section is the continuing economy where wages are low, and the other section is the newly industrialising one, where firms invest capital. This could also lead to volatility in the market, growing dissatisfaction and widening gaps of inequality. This issue is apparent in China for example where, "the government is concerned about growing rural unrest as the hundreds of millions of rural poor are left behind in Chinas surging economy."5 "There is a sense that if they continue to grow they could pose a major threat to Chinese stability." In terms of economics however, the existence of the first plays an important role in supplying the pool of labour. The industrialising one can operate effectively, as it is perfectly elastic in terms of supply. The successful expansion of the industrial sector will propagate a duo-economy. The negate factor can be, the ability for an LDC to acclimatize at once, which may considerably increase a dual economy. ...read more.

A blend of low prices and income elasticity of demands of demand for primary goods and the propensity to save raw materials as technology improves elsewhere. Fair trade organization exists "who guarantee farmers and producers a 'fair' price for the goods they produce."8 This generates an extent of price growth and development, which can then, take place at a more consistent level. The final, arguably the most essential aspect of aid, is the concept of sustainable development9. This means that they are attempting to grow today without damaging the prospects for development for future generations tomorrow. Some doubt if this is really possible but to achieve it means investing more in such courses of action as: * Recycling * Using alternative methods and resources to generate power etc * Watching our biodiversity * Admitting to both social costs and benefits and accepting that someone has to pay the true cost of resource allocation. Source: Triplea Purely said, economic growth and development is of the essence, a fundamental and an imperative aspect for every developing nation, because after all when it comes down to the basics of economics, "growth is good", and is treated as the stepping stone as a set view of growth and development throughout multinational economies. But in relation to developing countries one must not disregard they're current status and the structure of the economy. Adopting these new schemes might not be appropriate and often these countries are furthermore weighed down by the lack of legal framework. ...read more.