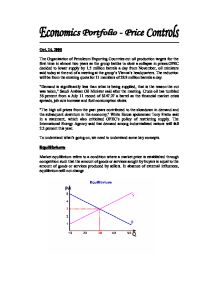 Oct. 24, 2008 The Organization of Petroleum Exporting Countries cut oil production targets for the first time in almost two years as the group battles to slow a collapse in prices.OPEC decided to lower supply by 1.5 million barrels a day from November, oil ministers said today at the end of a meeting at the group's Vienna's headquarters. The reduction will be from the existing quota for 11 members of 28.8 million barrels a day. "Demand is significantly less than what is being supplied, that is the reason the cut was taken," Saudi Arabian Oil Minister said after the meeting. Crude oil has tumbled 56 percent from a July 11 record of $147.27 a barrel as the financial market crisis spreads, job cuts increase and fuel consumption slows. "The high oil prices from the past years contributed to the slowdown in demand and the subsequent downturn in the economy," White House spokesman Tony Fratto said in a statement, which also criticized OPEC's policy of restricting supply. ...read more.

To correct this, the supply needs to be reduced. In a situation of low supply, which has the potential to drive oil prices extremely high, OPEC responds by asking member nations to increase supply in order to reduce the price below top price. As shown in the fig below, the low supply causes price to reach above maximum price. These steps are advantageous as they help to stabilize prices.But, there's also a setback. These steps undermine the ideals of the free market system according to which, the prices should be determined solely by market forces. If the current oil prices are low, consumers should be allowed to benefit from them. On the other hand, if the prices are high, producers should be free to benefit from them. Also, there is a question of long term benefits of these steps. These steps will stabilize the prices only for a short period of time. Eventually, the market forces will act and destabilize the prices until the equilibrium is finally attained. ...read more.