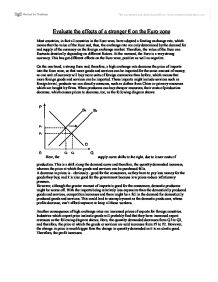 Effects of a stronger Euro on the Eurozone

Evaluate the effects of a stronger � on the Euro zone Most countries, in fact all countries in the Euro zone, have adopted a floating exchange rate, which means that the value of the Euro and, thus, the exchange rate are only determined by the demand for and supply of the currency on the foreign exchange market. Therefore, the value of the Euro can fluctuate drastically depending on different factors. At the moment, the Euro is a very strong currency. This has got different effects on the Euro zone, positive as well as negative. On the one hand, a strong Euro and, therefore, a high exchange rate decrease the price of imports into the Euro zone, so that more goods and services can be imported for the same amount of money, as one unit of currency will buy more units of foreign currencies than before, which means that more foreign goods and services can be imported. ...read more.

However, although the greater amount of imports is good for the consumers, domestic producers might be worse off. With the imports being relatively less expensive than the domestically produced goods and services, competition increases and there might be a fall in the demand for domestically produced goods and services. This could lead to unemployment as the domestic producers, whose profits decrease, can't afford anymore to keep all these workers. Another consequence of high exchange rates are increased prices of exports for foreign countries. Industries which export price inelastic goods will probably find that they have increased export revenues as the following diagram shows. Here, the quantity demanded decreases from Q1 to Q2, and therefore, the price at which the goods or services are sold increases from P1 to P2. However, the change in price is much bigger than the change in quantity demanded as it is an elastic good. ...read more.

However, although the high export costs will in the short run harm domestic producers, as it threatens their international competitiveness, they will in the long run increase their inflationary discipline. In order to maintain their competitiveness, domestic firms have to lower their costs of production, so that their prices decrease and they export more. In order to lower their costs of production, they have to be more efficient, which will, ideally, eventually result in a more efficient economy overall. This shows, that a strong Euro can have both, positive and negative, consequences on economies. But whether it is considered to be good or bad, very much depends on the kind of economy: A strong Euro doesn't have the same effect on all countries in the Euro zone. Whereas economies which specialise on exports, such as Germany might not want a too strong Euro, as their international competitiveness might decrease, economies which very much rely on imports might be better off with a strong Euro. ...read more.