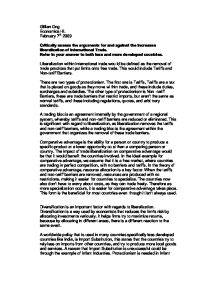 Gillian Ong Economics HL February 7th 2009 Critically assess the arguments for and against the increases liberalization of International Trade. Refer in your answer to both less and more developed countries. Liberalization within international trade would be defined as the removal of trade practices that put limits onto free trade. This would include Tariffs and Non-tariff Barriers. There are two types of protectionism. The first one is Tariffs, Tariffs are a tax that is placed on goods as they move within trade, and these include duties, surcharges and subsidies. The other type of protectionism is Non-tariff Barriers, these are trade barriers that restrict imports, but aren't the same as normal tariffs, and these including regulations, quotas, and arbitrary standards. A trading bloc is an agreement internally by the government of a regional system, whereby tariffs and non-tariff barriers are reduced or eliminated. This is significant with regard to liberalization, as liberalization removes the tariffs and non-tariff barriers, while a trading bloc is the agreement within the government that organizes the removal of these trade barriers. ...read more.

Protectionism is needed in Infant Industries, as these industries take place in less developed countries, and don't have the economies of scale advantages that the more developed industries have. However less developed countries, or countries with Infant Industries, are usually very inefficient, are unlikely to develop quickly. The impact of liberalization on Infant Industries is that it won't benefit countries with emerging economies China and India, but it will benefit countries with developed industries like Europe and the USA. Another reason that Import Substitution is unsuccessful could be that the benefits of Import Substitution go to foreign firms, because foreign firms are able to use taxes and subsidies to their advantage, as well as placing their industries behind the tariffs. So Import Substitution won't benefit LECD's but the MEDC's will benefit. Employment is a key factor that is affected when liberalization occurs. When companies outsource, and there is liberalization, firms will choose to move to cheaper places, in turn hiring workers at cheaper areas e.g. ...read more.

is the measurement of the payments between one country and the other countries that that specific country trades with. It is the total of all transactions, and is determined by the countries exports and imports of all goods and services as well as financial capital and transfers. So we can see that as liberalization takes place, the exports and imports have no more trade barriers placed on them, therefore supply will increase, and the balance of payments within two countries trading will increase as the imports and exports will increase respectively. Liberalization also causes many social and cultural consequences as countries are characterized by what they sell. For countries in Asia, they produce rice, tea etc. For countries like South America, they specialize in coffee, cocoa etc. Liberalization causes a bigger export rate for these specific products to other countries, also increasing diversity within each country, therefore causing a positive effect socially. However, if a country exports many of their 'signature' goods, then the cultural aspect of their country is less enhanced, as when liberalization occurs, now many countries will be able to have that same product, and the producers lose cultural aspects. ...read more.