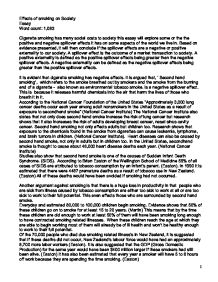 Effects of smoking on Society

Everyday and estimated 80,000 to 100,000 children begin smoking. Evidence shows that 50% of these children go on to smoke for at least 15 to 20 years. (Martin) This means that by the time these children are old enough to work at least 50% of them will have been smoking long enough to have contracted smoking related illnesses. When these children reach the age at which they are able to begin working most of them will already be of ill health and won't be healthy enough to work to their full potential. Of the 70,000 people who died due smoking related illness's in New Zealand, it is suggested that if these deaths did not occur, New Zealand's labour force would have had an approximately 8,700 more labor workers (Easton). It is also suggested that the GDP (Gross Domestic Production) for the same year would have been $400 million larger if these smokers had still been alive. (Easton) It has also been estimated that every year a smoker will have 5 to 6 hours off work because they are spending the time smoking. ...read more.

This is because, when the effects of cigarette smoking are positive people will then want to smoke more because it is good for society. So this will then cause the demand for cigarettes to increase. Resulting in the demand curve shifting to the right and going from being HPE to HSB. From the overwhelming evidence presented it is evident that cigarette smoking has negative externalities to our society. This is determined because the negative social costs to our society are far greater than the positive. Sources Easton, Brian . "The Social costs of tobacco use and alcohol misuse." Wellington School of Medicine 2(1997). Martin, Terry. "Smoking Cessation." About.com. January 28, 2007. The New York Times Company. 3 Oct 2007 <http://quitsmoking.about.com/cs/antismoking/a/statistics.htm>. Rauscher, Megan . "Smoking lowers Parkinson's disease risk ." Sciencentific American.com 20 March 2007 4 Oct 2007 <http://www.data-yard.net/10v2/parkinson.htm>. Rethink, "Smoking and Mental Illness." Not Alone 20 March 2007 4 Oct 2007 <http://www.enotalone.com/article/3110.html>. "Secondhand Smoke: Questions and Answers." National Cancer Institute . U.S National Institutes of Health . 2 Oct 2007 <http://www.cancer.gov/cancertopics/factsheet/Tobacco/ETS>. Vastag, Brian. "Smoke This: Parkinson's is rarer among tobacco users." Science News- Online July 14, 2007 4 Oct 2007 <http://www.sciencenews.org/articles/20070714/fob4.asp>. ?? ?? ?? ?? 1 ...read more.