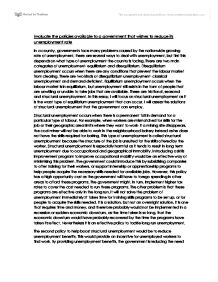 However, this policy has a high opportunity cost as the government will have to forego spending in other areas to afford these programs. The government might, in turn, implement higher tax rates to cover the cost needed to run these programs. The other problem is that these programs are effective only in the long run. It will not solve the problem of unemployment immediately; it takes time for training skills programs to be set up, or for people to acquire the skills needed. It is a solution, but not an overnight solution, it is one that requires time and money, and therefore probably would not be implemented in a recession or sudden economic downturn, as the time taken is so long, that the economic downturn would have probably recovered by the time the programs have taken its effect. ...read more.

In this case, the workers would be left in a dire plight, with less money, and therefore lower living standards, which widens the gap in income inequality amongst the people. For this essay, I have only compared two policies of structural unemployment as it would not be equal to compare a policy for a type of unemployment (i.e. frictional) then another policy to help another type of unemployment (to seasonal) as the policies are dependent on their respective types. Therefore in conclusion, I think that although the first policy of skills training has its drawbacks, like being effective only in the long run, it does have great benefits in solving structural unemployment, and it does outweigh the second policy, as the negative effects the second policy might have on its people is higher, therefore I think the first policy is a more permanent solution to reducing unemployment. ...read more.