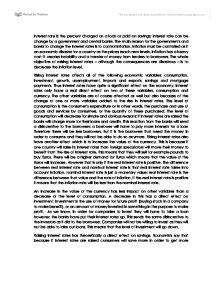 Interest rate is the percent charged on a loan or paid on savings; interest rate can be change by a government and central banks. The main reason for the governments and banks to change the interest rates is to control inflation. Inflation must be controlled as it an economic disaster for a country as the prices reach new levels. Inflation has a heavy cost: it creates instability and a transfer of money from lenders to borrowers. The whole objective of raising interest rates - although the consequences are disastrous - is to decrease the inflation level. Rising interest rates affects all of the following economic variables: consumption, investment, growth, unemployment, imports and exports, savings and mortgage payments. Thus interest rates have quite a significant effect on the economy. Interest rates only have a real direct effect on two of these variables, consumption and currency. The other variables are of course affected as well but also because of the change of one or more variables added to the rise in interest rates. ...read more.

Investment is the use of money for future profit (buying stock in a company to make benefit), or an amount of money invested in something in the purpose to make profit. As we know, in order for companies to invest they will have to take a loan however, the banks have put their interest rates up. This sends the same disincentive to the investors as it did to the borrowers. Companies will not be willing to invest as they will not be able to take out loans. This means that the level of investment will go down. Raising interest rates has theoretically a direct effect on savings. Economists say that because if interest rates are raised consumers will save more in order to get more money. However, savings are affected by interest rate to a small extent. These days the main factor on savings will be the income. People with more income will tend to save more. Another way for savings is affected is because of fear, fear of losing a job or inflation go up will make them save more. ...read more.

This is because none of the variables described above will change right when the interest rates are raised. The stakeholders for this are the consumers, if the interest rate is higher than the inflation rate there will be a transfer of money from lenders to borrowers. Also rich will benefit as they have more savings and will get more money from this, but for poorer it will be a disadvantage as they cannot save and get interest money. Often the high paid jobs have less risk to be lost compared to the small wage job. However the most important thing for an economy is to keep inflation under control. Inflation is an economic bomb. Using the interest rate is a monetary policy. So although raising the interest rate has a negative effect on most variables on the long run it will decrease inflation and improve the economy. Another way to bring down inflation is supply side policies which are also monetary. Supply side policies include no minimal wage, less trade union power, fewer state benefits which will create an incentive to take a job, decrease income tax and increase competition. ...read more.