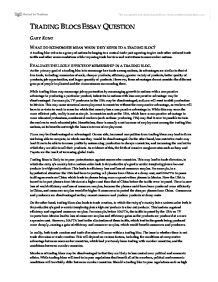 TRADING BLOCS ESSAY QUESTION GARY KONG WHAT DO ECONOMISTS MEAN WHEN THEY REFER TO A TRADING BLOC? A trading bloc refers to a group of nations belonging to a mutual trade pact agreeing to give each other reduced trade tariffs and other accommodations while imposing trade barriers and restrictions to nonmember nations. EVALUATE THE LIKELY EFFECTS OF MEMBERSHIP IN A TRADING BLOC. As the primary goal of a trading bloc is to encourage free trade among nations, its advantages are similar to that of free trade, including: economies of scale, cheaper products, efficiency, greater variety of products, better quality of products, job opportunities, and larger quantity of products. However, these advantages do not consider the different groups of people implicated and the circumstances surrounding them. While trading blocs may encourage job opportunities by encouraging growth in nations with a comparative advantage in producing a particular product, industries in nations with less comparative advantage may be disadvantaged. ...read more.

On the other hand, less restrictive trade may lead firms to be able to increase profits by outsourcing production to cheaper countries, and increasing the market for which they are able to sell their products. As evidence of this, the birth of massive conglomerates such as Sony and Toyota are the result of increasing global trade. Trading blocs is likely to impose protectionism against nonmember countries. This may lead to trade diversion, in which the entry of a country into a customs union leads to the production of a good or service transferring from a low-cost producer to a high-cost producer. This leads to efficiency loss and loss of consumer surplus. For example, in a hypothetical situation: the USA had been importing cell phones from China at a cheap cost, until NAFTA imposes tariff agreements on China which leads to phones being more expensive than phones in Mexico. ...read more.

However, NAFTA lead to the elimination of these tariffs, which lead to the goods being produced more cheaply, causing a gain of efficiency and consumer surplus, which would benefit consumers and producers. In reality, both trade creation and trade diversion will occur within a trading bloc. The issue is whether there is net trade diversion or trade creation. This will depend on various factors, including the conditions of comparative advantage between nonmember countries, which had previously been trading with member countries, and the conditions between member countries. Members of trading blocs may be disadvantaged in that they are likely to lose control over political and economic affairs. While trading blocs will tend to impose regulations that benefit all of its members, political and economic conditions will inevitably differ between member countries. Should a trading bloc impose regulations such as high interest rates, some countries may be benefitted more than others may. Countries facing high inflation, for example, may benefit from this, while others seeking to stimulate economic growth may find this disadvantageous. ...read more.