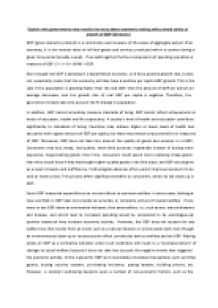 ﻿Explain why governments may need to be wary about economic setting policy aimed solely at growth of GDP (10 marks) GDP (gross domestic product) is a commonly used measure of the value of aggregate output of an economy; it is the market value of all final goods and services produced within a country during a given time period (usually a year). If we add together the four components of spending we obtain a measure of GDP: C + I + G + (X-M) = GDP. Even though real GDP is growing in a hypothetical economy, so it has a positive growth rate, is does not necessarily mean that the economy will also have a positive per capita GDP growth. This is the case if the population is growing faster than the real GDP, then the amount of GDP per person on average decreases, and the growth rate of real GDP per capita is negative. ...read more.

Technological advances often permit improved products to be sold at lower prices. This process offers significant benefits to consumers, which do not show up in GDP. Some GDP-measured expenditures do not contribute to economic welfare. In some cases, looking at rises and falls in GDP does not provide an accurate, or complete, picture of overall welfare. If one were to use GDP alone as a normative indicator, then externalities, i.e., such as war, natural disasters and disease, and which lead to increased spending would be considered to be unambiguously positive inasmuch they increase economic activity. However, the GDP does not account for any welfare loss that results from an event such as a natural disaster or a toxic-waste spill, even though an environmental clean-up or reconstruction effort contributes both to welfare and the GDP. ...read more.

GDP does not differentiate between depleting assets and generating incremental wealth. Policies aimed solely at growth of GDP, and ignores the effects on the environment, leads to environmental unsustainability, but unsustainability leads to lower economic growth due to destruction of common access resources. On the other hand, economic growth based on the principle of sustainable development leads to environmental preservation, which in turn can be expected to lead to higher economic growth in the future. Moreover, GDP ignores distribution of income and consumption. The degree to which individuals and different groups share in a country?s prosperity is another indicator of economic and social well-being. GDP per capita, which divides the GDP by the country?s population, provides a rough estimate of each person?s ?share? of the market economy. However, in reality, some people?s share of the economy is greater than others. This level and changes in inequality in the distribution of incomes and consumption, and the incidence of poverty, cannot be determined by tracking the GDP. ...read more.