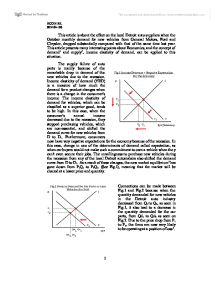 This article is about the effect on the local Detroit auto suppliers when the October monthly demand for new vehicles from General Motors, Ford and Chrysler, dropped substantially compared with that of the same time last year. This article presents many interesting points about Economics, and the concept of demand1 and supply2, income elasticity of demand, can be applied to this situation. The supply failure of auto parts is mainly because of the remarkable drop in demand of the new vehicles due to the recession. Income elasticity of demand (YED) is a measure of how much the demand for a product changes when there is a change in the consumer's income. The income elasticity of demand for vehicles, which can be classified as a superior good, tends to be high. ...read more.

to Q2, as seen in Fig.1, it also lead to a decrease in the quantity demanded for the car parts, from Qd1 to Qd2 as seen on Fig.2. Due to the price drop from P1 to P2, the firms are now very likely to be operating at a position of loss4. Price elasticity of supply (PES) is a measure of how much the supply of a product changes when there is a change in the price of the product. In the short run5, the PES of key car parts is very inelastic, but auto suppliers would not be likely to increase supply to try to save its market because the auto makers are also suffering from recession and by increasing supplies at this stage would only mean the total cost of productions will rise significantly, this would leave the poorly-performing auto suppliers no option but to temporarily shut down. ...read more.