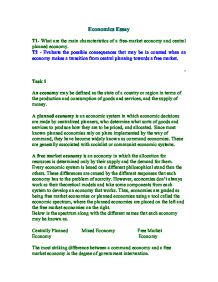 Economics Essay T1- What are the main characteristics of a free-market economy and central planned economy. T2 - Evaluate the possible consequences that may be in counted when an economy makes a transition from central planning towards a free market. . Task 1 An economy may be defined as the state of a country or region in terms of the production and consumption of goods and services, and the supply of money. A planned economy is an economic system in which economic decisions are made by centralized planners, who determine what sorts of goods and services to produce how they are to be priced, and allocated. Since most known planned economies rely on plans implemented by the way of command, they have become widely known as command economies. These are generally associated with socialist or communist economic systems. A free market economy is an economy in which the allocation for resources is determined only by their supply and the demand for them. Every economic system is based on a different philosophical stand than the others. These differences are caused by the different responses that each economy has to the problem of scarcity. However, economies don't always work as their theoretical models and take some components from each system to develop an economy that works. Thus, economies are graded as being free market economies or planned economies using a tool called the economic spectrum, where the planned economies are placed on the left and the free market economies on the right. ...read more.

growth rate was nearly stagnant, growing by only 0.2 percent, consumer prices had risen by 250 percent, and real wages increased by a mere 9 percent. In view of the economic situation, the new government introduced radical measures that were intended to stabilize the economy and encourage the development of a free market. The country's much publicized "shock therapy" had begun. There was massive a cut down in government spending, private enterprise was allowed and the government sat back and watched. Initially the inflation rose and the situation seemed to be worsening, when entrepreneurship and the laws of supply and demand kicked in, and the free market economy began to materialize. In 1990-91, Poland experienced a deep recession throughout which GDP decreased by almost 20 percent, the demand for labour decreased, and unemployment increased. During the first 3 years of the nation's transformation, both the State sector and the cooperative sector lost 4.6 million jobs, while the flourishing private sector created 2.6 million new jobs. In 1992, the number of unemployed reached 2.8 million, of whom 80 percent had been previously employed. Since 1992, Poland has experienced annual economic growth ranging from 3 percent to 7 percent; correspondingly, inflation decreased from 585 percent in 1990 to 11.8 percent in 1998. Employment has increased, unemployment has begun to decrease, and real wages have risen once more ( as they say things get worse before they get better). The GDP growth rate witnessed an extreme rise. ...read more.

Consequently, even in the face of the economic slowdown, the Polish central bank imposed a deflationary policy, with high interest rates aimed at stabilising the value of the currency, the zloty. Obviously, this had further negative effects in terms of lower exports and greater import penetration. Since then, economic growth has slackened to the point where it was only 1 per cent last year, and the growth is expected to be even less this year. Poland has experienced a surge in the tourism industry. It has opened up to foreign investors and found itself a place in the global economy. Poland has also opened up to Western media and publications which has increased its global awareness but also brought with it pornographic content. Under the command economic system, Poland's natural resources were fast depleting and suffering from contamination, rendering them useless. The transition to free market has lead to greater environment awareness and steps have been taken by the Polish government towards rehabilitation of the environment and protection of the natural resources. Certainly, the free market principles have not delivered the rosy picture they painted to Poland. Poland has paid an extremely high price for a liberal economy, one it continues to pay; but the situation has improved from what it was under a command economy, and though it's not a desirable condition, it is the lesser of the two evils. ...read more.