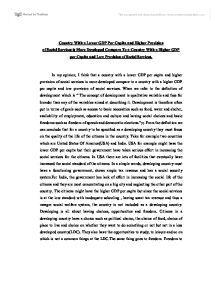 Take for example two countries which are United States Of America(USA) and India. USA for example might have the lower GDP per capita but their government have taken serious effort in increasing the social services for the citizens. In USA there are lots of facilities that eventually have increased the social standard of the citizens. In a simple words, developing country must have a functioning government, shows ample tax revenue and has a social security system.For India, the government has lack of effort in increasing the social life of the citizens and they are most concentrating on a big city and neglecting the other part of the country. ...read more.

Citizens in a developing country have a choice such as political choice, the choice of food, choice of place to live and choice on whether they want to do something or not but not in a less developed country(LDC). They also have the opportunities to study, to leisure and so on which is not a common things at the LDC.The same thing goes to freedom. Freedom to speak, freedom to give opinion and freedom from arbitrary governance and random applicability of the law. These are all qualitative variable which determined the rate of development of the country and obviously, they are all parts of social services that is provided by the government of the country. [1]pg. 14,Economics In Terms Of The Good, The Bad and The Economist, McGee ...read more.