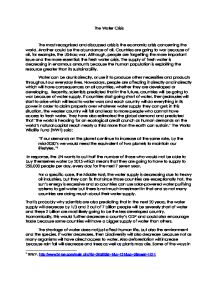 The Water Crisis The most recognized and discussed crisis is the economic crisis concerning the world. Another could be the abundance of oil. Countries are going to war because of oil, for example, the US-Iraq war. Although, people are forgetting the more important issue and the more essential: the fresh water crisis. The supply of fresh water is decreasing in enormous amounts because the human population is exploiting the resource greater than its sustainability. Water can be drunk directly, or use it to produce other necessities and products throughout our everyday lives. Nowadays, people are affecting it directly and indirectly which will have consequences on all countries, whether they are developed or developing. Recently, scientists predicted that in the future, countries will be going to war because of water supply. ...read more.

the number of those who would not be able to buy themselves water by 2015 which means that they are going to have to supply to 250,000 people per day, every day for the next 7 seven year. For a specific case, the Middle East, the water supply is decreasing due to heavy oil industries, but they can fix that since those countries are exceptionally hot, the sun's energy is excessive and so countries can use solar-powered water purifying systems to get water but there is not much investment in that and so not many countries are doing much about their water supply. That is probably why scientists are also predicting that in the next 20 years, the water supply will decrease by 1/3 and 2 out of 7 billion people will be severely short of water and these 2 billion are most likely going to be the less developed country. ...read more.

Countries are trying to overcome this issue by looking for ways in which they can limit it, if not stop it. Suggestions: 1. More awareness: but the problem is that it is difficult to communicate to the whole world. 2. Creating government policies in between countries and making treaties concerning water. 3. Limiting the amount of water allowed to be exploited by one household. 4. Invest in projects to obtain freshwater from saltwater. Usually actions which are planned to take place against these issues don't happen everywhere, but start off in one country. So trying to decrease the water footprint will take a long time due to the delay in trying to raise awareness in other less developed countries which are unable to act on their own but need foreign help. 1 WWF : http://www.bi-me.com/main.php?id=26580&t=1&c=131&cg=2&mset=1011 ?? ?? ?? ?? ...read more.