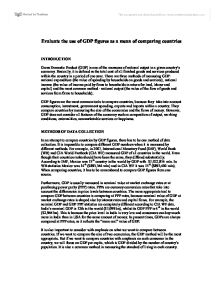 Evaluate the use of GDP figures as a mean of comparing countries INTRODUCTION Gross Domestic Product (GDP) is one of the measures of national output in a given country's economy. Basically, it is defined as the total cost of all finished goods and services produced within the country in a period of one year. There are three methods of measuring GDP: national expenditure (the value of spending by households on goods and services), national income (the value of income paid by firms to households in return for land, labour and capital) and the most common method - national output (the value of the flow of goods and services from firms to households). GDP figures are the most common tools to compare countries, because they take into account consumption, investment, government spending, exports and imports within a country. They compare countries by measuring the size of the economies and the flows of money. However, GDP does not consider all features of the economy such as composition of output, working conditions, externalities, nonmarketable services or happiness. METHODS OF DATA COLLECTION In an attempt to compare countries by GDP figures, there has to be one method of data collection. ...read more.

It is also a common method in measuring the standard of living in each country. For instance, it cannot be said that there is higher living standart in India (GDP PPP = $2,966 bn) than in Poland (GDP PPP = $623 bn), as India has much bigger population. After calculating GDP PPP per capita, it appears that each Pole earns $16,200 a year, while each Indian earns only $2,600. WHAT GDP DOES NOT MEASURE? GDP does not measure the composition of output and therefore cannot be a good indicator of standard of living. For example, according to CIA WF the GDP PPP per capita is 13% higher in Oman ($19,000) than in Lithuania ($16,800), so there should be higher standart of living in Oman. However, GDP PPP per capita does not take into account that Oman spends 11.4% of GDP on military, while Lithuanian military expenditure is equal to 1.2% of GDP. Because of that, there is higher standard of living in Lithuania, because it spends more money for its infrastructure, education and health system. It is impossible to measure positive and negative externalities by GDP. A country such as China has GDP more than twice bigger than Germany, but it produces six times more greenhouse gases than Germany. ...read more.

Lithuania is a country with the highest murder rate in the world (9.38 per 100 thousands inhabitants per year), while Oman is the 5th country in the world with the lowest murder rate (0.59 per 100 thousands inhabitants per year). In July 2006, the New Economics Foundation introduced the Happy Planet Index (HPI), which was invented to challenge GDP as it does not measure the happiness. According to it, USA with the highest GDP PPP in the world is 150th country out of 178 in terms of happiness. It has to be stated that GDP does not reflect the quality of goods. When a quality of a good is improved and the price of it falls, then GDP also falls despite the fact that the quality of a good improved. GDP does also not take into account educational level, productivity of the public sector, life expectancy, level of democracy, economic freedom and many other variables. CONCLUSION GDP figures are quite perfect when comparing the outputs and size of economies of different countries. However, GDP figures are not really useful when comparing with respect to standard of living or different feature. There are many indexes such as Human Development Index, Democracy Index, Happy Planet Index or Environmental Performance Index, which can be also used to compare countries. ?? ?? ?? ?? ...read more.