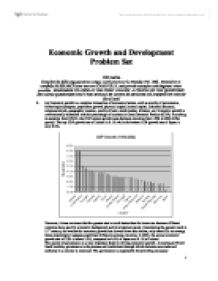 Economic Growth and Development Problem Set 120 marks Complete the following questions using a word processor by Monday Feb. 28th. Remember to carefully REASEARCH your answers CAREFULLY, and provide examples and diagrams when possible. REMEMBER TO LOOK AT THE POINT VALUES! A COUPLE OF THE QUESTIONS ARE LONG QUESTIONS THAT YOU WOULD BE GIVEN 60 MINUTES TO ANSWER BY THE IB! Good Luck! 1. (a) Economic growth is a complex interaction of numerous factors, such as quality of governance, technological progress, population growth, physical capital, human capital, industrial structure, religious beliefs, geographic location, quality of land, stock market, inflation, etc. Economic growth is conventionally measured with the percentage of increase in Gross Domestic Product (GDP). According to statistics from OECD, the GDP annual growth rates between countries from 1998 to 2002 differ greatly. The top GDP growth rate of Ireland is 8.1% while the bottom GDP growth rate of Japan is only 0.2%. However, it does not mean that the greater rate is much better than the lower one because different countries have specific economic background and development speed. Considering the general trend in 21st century, the worldwide economic growth has slowed down than before, only about 2% on average. Most surprisingly it appears significant difference among countries. In 2003, the annual economic growth rate of USA is about 2.5%, compared to 0.5% of Japan and 8.1% of Ireland. The quality of governance is a very important factor in driving economic growth. According to World Bank Institute, governance is the process and institutions through which decisions are made and authority in a country is exercised. The governance is responsible for providing necessary infrastructure and social environment for economic development of the whole society. In many developing and developed countries, the main purpose of governance has always been set to stimulate economic development. Stable political environment and lack of violence are also necessary for continuous economic development. Good governance also insists on transparency, control of corruption and consultative process between government and private interests. ...read more.

Economic growth refers to increases in the quantity of output (goods or services) produced over a period of time (usually a year) per capita. Economic development refers to raising the standard of living and well-being of people, particularly in less developed countries (LDCs). It involves increasing income levels and reducing poverty, reducing income inequalities and unemployment, and increasing the provision of basic goods and services, like shelter and food. Merit goods are goods that are held to be desirable for consumers, but which are underprovided by the market. The production possibilities model can be used to illustrate an economy's choice between economic growth without economic development, and economic growth with economic development. This is shown in the figure below; where the vertical axis measures industrial goods production and the horizontal axis represents merit goods production. Assume that a country is initially at point A on PPC1. A rightward shift of its production possibilities curve to PPC2 shows an increase in production possibilities. The country can choose to move to point B or point C on PPC2. (We are assuming for simplicity that the economy is producing at some point on its PPC.) Both moves indicate that economic growth has occurred, because in both cases the economy is capable of producing a greater volume of output. Moving to point B indicates growth without development because the country has chosen to produce relatively more industrial goods than merit goods. Moving to point C shows growth with development, since the country has made a choice to place a relatively greater emphasis on the production of merit goods rather than industrial goods. Note that the production possibilities model can illustrate that economic development is occurring only with respect to increased merit goods production, which is only one aspect of development. It cannot illustrate other aspects of development (such as poverty reduction, improved income distribution, etc). (Total 10 marks) ...read more.

In other words, there would be a more even distribution of wealth. Moreover, as the economic growth increases, the income equality will also increase because people, in every income class, will have more money to spend on goods and services. (5) (b) Discuss the view that the benefits of economic growth will always 'trickle down' into people's lives. (paragraph ?) Trickle-down theory is an economic theory which states that investing money in companies and giving them tax breaks is the best way to stimulate the economy. Proponents of this theory believe that when government helps companies, they will produce more and thereby hire more people and raise salaries. The people (lower-income individuals), in turn, will have more money to spend in the economy. This theory was used in 1950s. By the late 1960s and early 1970s, it was becoming increasingly apparent that many less developed countries were not performing according to expectations. First, it was noted that the GNP per capita gap between rich countries and poor countries had more than doubled on average in the period 1950-1975. Growth rates were highly uneven: while some less developed countries were growing rapidly (especially the oil-rich countries in the Middle East), others were experience very low or even negative growth rates (especially in Africa). Second, it became apparent that the number of people living in extreme poverty (defined as living on less than US$1 per day) was increasing rather than decreasing. A major study of 43 countries published in 1973 showed that economic growth in the early years benefited only the wealthiest groups, and in a later phase benefited middle income groups, while the position of the poorest 40% of the population grew worse both relatively and absolutely. In other words, the benefits of economic growth were not "tricking down" to the poorest members of society. Because economic growth cannot eliminate widespread poverty, it can be concluded, based on the this fact, that the benefits of economic growth will not always "trickle down" into people's lives, especially not into poor people's lives. (8) (Total 13 marks) ?? ?? ?? ?? 1 ...read more.