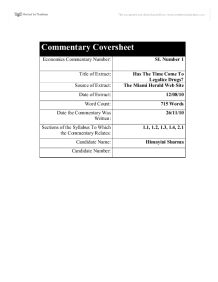 Has the Time Come to Legalize Drugs?

Commentary Coversheet Economics Commentary Number: SL Number 1 Title of Extract: Has The Time Come To Legalize Drugs? Source of Extract: The Miami Herald Web Site Date of Extract: 12/08/10 Word Count: 715 Words Date the Commentary Was Written: 26/11/10 Sections of the Syllabus To Which the Commentary Relates: 1.1, 1.2, 1.3, 1.4, 2.1 Candidate Name: Himayini Sharma Candidate Number: Has The Time Come To Legalize Drugs? Bottom of Form Your vote has been counted, thank you for voting. Top of Form Bottom of Form BY ANDRES OPPENHEIMER: [email protected] Legalization of drugs -- long an issue championed mainly by fringe groups -- is rapidly moving to the mainstream in Latin America. Last week's surprise statement by former Mexican President Vicente Fox in support of ``legalizing production, sales and distribution'' of drugs made big headlines around the world. Fox, a former close U.S. ally who belongs to the same center-right political party as President Felipe Calder�n, rocked the boat at home by indirectly criticizing the very premise of Calderon's all-out military offensive against Mexico's drug cartels, which has cost 28,000 lives since 2006. Calderon immediately responded that he opposes legalization of drugs, although he has opened a dialogue with political parties about the future of his country's anti-drug policies. The left-of-center Party of the Democratic Revolution announced that it supports ``de facto legalization'' of drugs. ...read more.

Kerlikowske disputed the idea that alcohol prohibition drove up crime in the United States in the 1920s, arguing that there were no reliable crime statistics at the time. And he rejected the notion that there has been no major increase in drug consumption in the Netherlands. ``In the Netherlands, consumption did go up. In fact, the Netherlands has been in the process of closing down hundreds of the marijuana cafes that had been in existence because of the problems that are occurring,'' he said. My opinion: I'm not convinced that a blanket legalization of drugs would work because government regulation of the cocaine and heroin businesses in countries that already have high corruption rates would result in greater official corruption. On the other hand, it's clear that after four years of Calder�n's U.S.-backed war on drugs, the cartels are smuggling more drugs, killing more people and becoming richer. Perhaps the time has come to take a step-by-step approach and start a serious debate about passing laws that would regulate legal production of marijuana, alongside massive education campaigns to discourage people from using it. Then, we could see who is right and consider what to do next. (c) Miami Herald. Miami Herald content is the intellectual property of Miami Herald. Any copying, republication or redistribution of Miami Herald content is expressly prohibited by federal law. ...read more.

Other people will notice why the drug is inelastic, and will avoid them due to its addictive dangers. Thus, the absence of undercover drug dealing will show people the dangers of drugs and lead to consumers and producers providing less of the drug once the government starts taxing, thus leading to a smaller population using them. The most beneficial aspect of drug legalization in Mexico would be taxing on the drug. As demand for drugs is inelastic, the tax revenue raised will be large. Additionally, the deadweight loss (fall in total surplus consumers and producers make) will be smaller as the consumers will not consume less at first even though producers will produce at a less quantity. These are shown on Figure 3. The consumers will pay more taxes as they desperately need to buy the drug, and eventually will try and consume less when they become financially diminished. They will seek rehabilitation, and thus shrink the market for drugs. If the government correctly uses the revenues raised by taxing on drugs to promote healthcare and drug rehabilitation, the Mexican economy can cause a decline in overall drug sale and use. Figure 3 In conclusion, Mexico's ex-President Vicente Fox should proceed with convincing the government to legalize drugs, as this measure will not only reduce consumption and production of these harmful products, but also promote society and the economy by raising revenue to enhance health and other aspects of the economy that need betterment. ...read more.