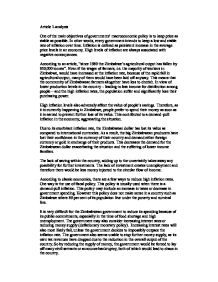 High levels of inflation are always associated with negative consequences. According to an article, since 1980 the Zimbabwes agricultural output has fallen by 850,000 tonnes. Even if the wages of farmers, i.e. the majority of workers in Zimbabwe

Article 1-analysis One of the main objectives of governments' macroeconomic policy is to keep price as stable as possible. In other words, every government intends to keep a low and stable rate of inflation over time. Inflation is defined as persistent increase in the average price levels in an economy. High levels of inflation are always associated with negative consequences. According to an article, "since 1980 the Zimbabwe's agricultural output has fallen by 850,000 tonnes". Even if the wages of farmers, i.e. the majority of workers in Zimbabwe, would have increased at the inflation rate, because of the rapid fall in agricultural output, many of them would have been laid off anyway. This means that the community of Zimbabwean farmers altogether have less to cherish. In view of lower production levels in the country - leading to less income for distribution among people - and the high inflation rates, the population suffer and significantly lose their purchasing power. ...read more.

The lack of investment creates unemployment and therefore there would be less money injected to the circular flow of income. According to classic economics, there are a few ways to reduce high inflation rates. One way is the use of fiscal policy. This policy is usually used when there is a demand-pull inflation. This policy may include an increase in taxes or decrease in government spending. However this policy does not make sense in a country such as Zimbabwe where 80 per cent of its population live under the poverty and survival line. It is very difficult for the Zimbabwean government to reduce its spending because of its public commitments, especially in the time of food shortage and high unemployment. The government may also consider increasing interest rates or reducing money supply (deflationary monetary policy). ...read more.

After 1980 when the government was unable to raise tax revenues, it responded by printing money to pay its bills. In 2005, Zimbabwe repaid part of its debt to the IMF by printing 21 trillion Zimbabwean dollars. In Harare, the capital city, bus drivers increase their prices twice daily. Currency notes are only printed on one side to save ink and come with a use-by-date. It seems that the government in Zimbabwe is running out of options. The only way for the government to improve the situation is to regain the trust of its people and the international community. This is sometimes not easy to achieve in the short run, especially when the steering wheel of affairs run out of hand. That is why Mugabe's government seems to be seeking a dignified way to step down and leave its successors to give the country a fresh start. ...read more.