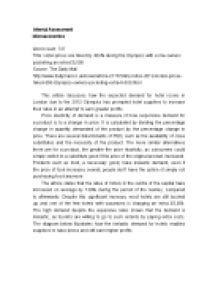 ï»¿Internal Assessment Microeconomics Word count: 727 Title: Hotel prices are hiked by 300% during the Olympics with some owners pocketing an extra £5,000 Source: The Daily Mail http://www.dailymail.co.uk/news/article-2176799/London-2012-Hotels-prices-hiked-300-Olympics-owners-pocketing-extra-5-000.html This article discusses how the expected demand for hotel rooms in London due to the 2012 Olympics has prompted hotel suppliers to increase their rates in an attempt to earn greater profits. Price elasticity of demand is a measure of how responsive demand for a product is to a change in price. It is calculated by dividing the percentage change in quantity demanded of the product by the percentage change in price. There are several determinants of PED, such as the availabilty of close substitutes and the necessity of the product. The more similar alternatives there are for a product, the greater the price elasticity, as consumers could simply switch to a substitute good if the price of the original product increased. ...read more.

Originally, the product was sold at price P1 with quantity Q1 demanded. After producers decided to increase the price to P2, quantity demanded fell to Q2. The value of the increase in price is greater than the value of the decrease in quantity demanded; producers are able to earn greater profit overall. There are two main reasons for the elastic demand of hotels in London. Firstly, those who are most likely to be affected by the rising hotel rates probably have high incomes, as they would?ve needed to be able to afford the luxury of spending both time and money in the first place. This means that although they are the ones who are most affected by the increased prices, they are also the ones who are most able to afford it. ...read more.

Tourists, on the other hand, suffer because there aren?t enough substitutes for hotels in London for them to turn to, and so most of them are forced to pay the higher hotel rates. In the short run, both the demand for and prices of hotel rooms in London will remain high, as many tourists flock to London to spectate the Olympics. In the long run, however, once the Games are finished, there will be less of an incentive for tourists to visit London. This fall in demand would result in a decrease in price, and a return to demand being elastic ? higher prices would lead to a significant decrease in demand. In conclusion, the London 2012 Olympics has resulted in inelastic demand for hotels in the area. This has resulted in significant price hikes, as hotels seek to take advantage of tourists willing to pay extra costs in order to spectate the Games. ...read more.