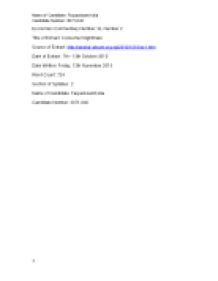 ﻿Name of Candidate: FaiyazAzamKolia Candidate Number: 3071-040 Economics Commentary Number: SL Number 2 Title of Extract: Consumer Nightmare Source of Extract: http://weekly.ahram.org.eg/2010/1018/ec1.htm Date of Extract: 7th - 13th October 2010 Date Written: Friday, 12th November 2010 Word Count: 724 Section of Syllabus: 2 Name of Candidate: FaiyazAzamKolia Candidate Number: 3071-040 ________________ Consumer nightmare Persistent hikes in food prices have taken fresh produce and meat costs to new heights, continuing an endless nightmare for consumers. Mona El-Fiqi reports The past few months have witnessed a series of unprecedented food price increases. Although the hikes are product of developments in the local and international markets, consumers from both low and middle income brackets are the ones paying the price. "With every visit to the supermarket, I expect to find an increase in prices of certain food products. This situation is not new for me, but it's still too much to bear. For now I am able to cover my family's needs, but if prices continue to rise this way I will no longer be able to afford such high food bills," said Aliaa Ahmed, the wife of a well-off engineer. For low and middle-income families, the situation is even worse. "When meat prices rose from LE45 to LE80 per kilo, we stopped eating meat altogether. ...read more.

On the whole, experts are dissatisfied with the marketing process of vegetables and fruits, whose poor organisation is causing price hikes. Hegazi said the government should allow agricultural cooperatives to play an active role in marketing the harvest, and meanwhile limit the role played by the private sector, if it wishes to minimise shelf prices for the benefit of consumers. Experts also recommend boosting investments in the agricultural sector, to help increase production and cut prices. Hegazi believes the government should provide incentives to investors to start up new agricultural projects. It should also establish cattle farms to raise meat production, given that meat prices are rapidly rising. Speaking to Al-Ahram Weekly, butcher Adbullah Ali said he has had to raise the cost of meat at his store as he is currently purchasing cows and buffaloes at high prices. "I used to buy a cow at LE6,000 to LE7,000 but now the price is between LE10,000 and LE15,000," he said. "Consumers refuse to buy meat at high prices. We are facing a clear state of recession," Ali added. In an attempt to reduce meat and poultry prices which, according to the Central Bank of Egypt (CBE), have each risen by 40 and 25 per cent respectively in 2010, the CBE decided on 2 October to exclude meat and poultry importers from having to provide a cash cover in banks for their imports. ...read more.

The price ceiling should be set reasonably and in the case of meat, it could be set at LE60 per kg. The benefit of this application mainly benefits the consumer since they have peace of mind that they would be able to buy meat and in the long run and short run, since prices can only increase so much and they will not have to worry about not being able to afford it. A consequence of implementing a price ceiling is that if the demand is high then a shortage is possible, however it is unlikely that it will lead to greater problems like illegal underground markets for meat etc. What this solution fails to do is to benefit the suppliers/producers hence a second intervention by the government will be needed. In the case of agriculture, difficulties that farmers faced were high temperatures, high prices of seeds and unavailability of fertilizers. Firstly, the government can provide subsidies for seeds, fertilizers and other raw materials to farmers which will directly raise the productivity and harvest of cultivated lands. Secondly, from an entrepreneurial scope, the government can provide agricultural firms with technology and can handle nationwide marketing which will not only draw interest and provide incentives to investors to set up new agricultural projects but also limit the role played by the private sector thereby controlling prices. ...read more.