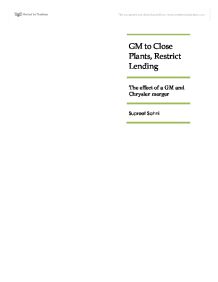 GM to Close Plants, Restrict Lending The effect of a GM and Chrysler merger Supreet Sahni The effect of a GM and Chrysler merger The global credit crisis, inflation and falling consumer confidence are being felt by auto makers and dealers. While this cause is putting a damper on auto sales this year, American automaker GM seeks a way out. Thousands have already been laid off and if conditions do not better between these giant auto monopolies, there is much more to come. GM shows an understanding of how their goods should be produced where at this stage, it is labour intensive. [1] A merger with Chrysler turns out to be an investment by cutting costs as the cost for paying their employees will lower for both companies as a whole. GM executives see that it will create relief for the company and make deeper cost cuts besides the fact how long lasting the result is. ...read more.

Similarly, neither GM nor Chrysler holds a stable economic status and a merger is more likely to increase the chance of making loss as a merger will only reduce the costs and expenses on a short term basis. The profits that both companies seek to make are years ahead of time as a result of a falling world economy. One might see this merger as a disaster however GM identifies it as opportunity cost. [2] GM seeks for a chance in this deal where, by sharing the production costs and plants, both companies will be able to stabilize and control overproduction. This merger provides is more beneficial than constantly closing plants, production sites and cutting down jobs for 30000 employees along with the continuation of losing revenue. Moreover, Adam Smith's theory of self-interest [3] plays key role in GM's part of this merger deal. It is for GMs own self-interest to merge with Chrysler as cost cuts in production will benefit GM more as a whole rather than Chrysler because GM is the one ...read more.

The closings are part of its efforts to cut expenses ahead of what is expected to be a substantial third-quarter loss. They also come as GM's top executives are considering how to ensure the company's future, including a merger with Chrysler. News of talks between GM and Chrysler emerged over the weekend. On Monday, Chrysler Chief Executive Officer Robert Nardelli told employees in a memo that the auto maker's top... 1 The labour intensive production defines the business of which the main cost is that of labour which is higher than the sales and/or the profit. 2 Opportunity cost is expressed in terms of the next best alternative and while of all the possible choices you value more. 3 Self-interest is the choice made by an individual for one's own advantage and benefit. 4 The law of diminishing returns says that a constant input will result in a decrease in output and a constant output will result in an increase in input. ?? ?? ?? ?? ...read more.