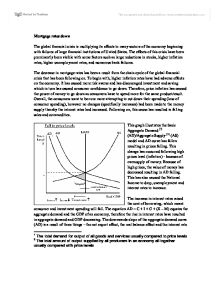 Mortgage rates down The global financial crisis is multiplying its effects to many sectors of the economy beginning with failures of large financial institutions of United States. The effects of this crisis have been prominently been visible with some factors such as large reductions in stocks, higher inflation rates, higher unemployment rates, and numerous bank failures. The decrease in mortgage rates has been a result from the chain cycle of the global financial crisis that has been following on. To begin with, higher inflation rates have had adverse effects on the economy. It has caused more risk averse and has discouraged investment and saving which in turn has caused consumer confidence to go down. Therefore, price inflation has caused the power of money to go down as consumers have to spend more for the same product/result. Overall, the consumers want to borrow more attempting to cut down their spending (loss of consumer spending), however no changes (specifically increases) had been made to the money supply thereby the interest rates had increased. ...read more.

The occurrence of this situation (falling mortgage rates) is a solution to the falling GDP. The mortgage rates have been dropped which is likely to increase aggregate demand which overall will also increase real GDP and reduce unemployment. Otherwise, there many exogenous factors that affect mortgage rates amount of down payment, the income of the mortgage borrower, total mortgage loan amount, the life of the mortgage rate and many others however there are limited factors that are significant to this situation - the income of the borrower and the duration of the mortgage rate. The income of the borrower is an essential requirement and has great affect on the interest rates as it determines if the consumer is able to pay back what they borrowed. The duration of the interest is essential (very significant to this situation) - the long term interest rates have also been decreased as this will help bring up the consumer confidence (consumers feel they are being offered a low interest rate for a long term). ...read more.

Christopher Dodd, D-Conn. A recent survey of senior loan officers from the Federal Reserve found that about 70% of banks raised their lending standards for prime mortgages, and about 90% of banks that offer nontraditional mortgages did so as well. In September, Fannie Mae (FNM, Fortune 500) and Freddie Mac (FRE, Fortune 500) were on the brink of failure, having racked up nearly $12 billion in losses from declining home prices, mortgage delinquencies and foreclosures. Federal officials assumed control of the firms and the $5 trillion in home loans they back. The Treasury put up as much as $200 billion to bail them out and placed them in a temporary "conservatorship" overseen by the Federal Housing Finance Agency. -- CNNMoney.com senior writer Tami Luhby contributed to this report. 1 The total demand for output of all goods and services usually compared to price levels 2 The total amount of output supplied by all producers in an economy all together usually compared with price levels 3 The ability to have ready access to invested money by an economy or the ability of a market to accept large transactions (the flow of money) ?? ?? ?? ?? ...read more.