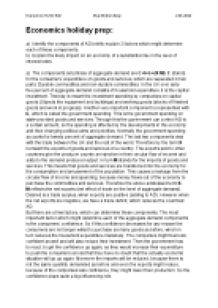 Identify the components of Aggregate Demand. Explain the impact on an economy of a rise in interest rates,

ï»¿Economics HL Mr.Bell Max Müller-Berg 2.01.2012 Economics holiday prep: a) Identify the components of AD briefly explain 2 factors which might determine each of these components. b) Explain the likely impact on an economy of a substantial rise in the level of interest rates. a) The components set phrase of aggregate demand are C+I+G+(X-M). C stands for the consumers’ expenditure on goods and services, which are separated in two parts: Durable commodities and non-durable commodities. In the UK over sixty-five percent of aggregate demand consists of household expenditure. I is the capital investment. Thereby is meant the investment spending by companies on capital goods (Objects like equipment and buildings) and working goods (stocks of finished goods and work in progress). Another very important component is represented with G, which is called the government spending. This is the government spending on state-provided goods and services. Through this the government can control AD to a certain amount, so the spending is affected by the developments in the economy and their changing political aims and priorities. ...read more.

So the confidence plays quite a big influencing role. Another influencing factor could be a sudden boom in the housing market, which would cause a chain of effects. So at first the consumers have indirectly more money, because their house has now a bigger merit than before. Therefore they would increase their household expenditure. Furthermore the companies would also increase their investment spending ? especially on buildings ? because they now see a huge potential in this business. On the other hand the government spending would decrease, because they would try to demagnetise the boom to minimize the level of inflation. The imports would probably rise, because of the greater spending of money by the consumers. The only component which would maybe stay the same is the export component. But even if it stays the same, the net exports would still change. That is the reason why the government plays such a big part in the aggregate demand, so that they can avoid that such factors influences the components that massively. ...read more.

The problem is, even if all conditions are given now, if the consumer doesn?t have the confidence to buy, the economy would still decrease and the money which the government spent in the circular flow of income would be useless. In the third situation the economy would be in a totally standstill. So the economy is already in a bust period and would still decrease, which would cause a recession and would make the consumers even less confident then before so that they would consume less as well. That would have a grave effect on the country?s economy, which is sometimes unstoppable, which in turn could lead to a currency depreciating. So as a conclusion a substantial rise in interest rates can have two different effects. On one hand it can calm the economy down if the fear of inflation is too big and if there is no potential economy gap left, but on the other side in every other situation it would drag the economy down and reach lower supply and demand points than before. Therefore the general most likely impact of higher interest rates is, that the economy reaches a level with a lower productivity (lower demand and supply level). ...read more.