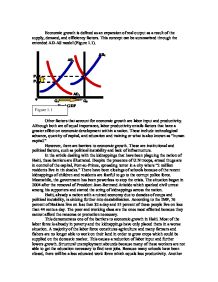 Economic growth is defined as an expansion of real output as a result of the supply, demand, and efficiency factors. This concept can be summarized through the extended AD-AS model (Figure 1.1). Other factors that account for economic growth are labor input and productivity. Although both are of equal importance, labor productivity entails factors that have a greater effect on economic development within a nation. These include technological advance, quantity of capital, and education and training or what is also known as "human capital." However, there are barriers to economic growth. These are institutional and political factors, such as political instability and lack of infrastructure. In the article dealing with the kidnappings that have been plaguing the nation of Haiti, these barriers are illustrated. Despite the presence of U.N troops, armed thugs are in control of the capital, Port-au-Prince, spreading terror in a city where "2 million residents live in tin shacks." ...read more.

This demonstrates one of the barriers to economic growth in Haiti. Most of the labor force is already in poverty and the kidnappings have only placed them in a worse situation. A majority of the labor force constitutes agriculture and many farmers and fishers are no longer able to work on their land in order to grow crops which could be supplied on the domestic market. This causes a reduction of labor input and further lowers growth. Structural unemployment abounds because many of these workers are not able to get the education necessary to find new jobs. Because many schools have been closed, there will be a less educated work force which equals less productivity. Another issue related to education and training is that a large percentage of young people and professionals have been leaving the country, creating a "massive brain drain" that causes the economy to potentially lose a more productive labor force. ...read more.

A second goal would be the equal distribution of wealth, which is a reason behind the armed thugs resorting to violence and intimidation. Taxes could be increased for those who are in the elite, while educational reforms are being set which would lower tuition costs for students and save parents a large part of their income. Preval's administration could also follow policies regarding the agricultural sector of the labor force and have there be programs in which a portion of the crops are sold as regional exports and the rest are used by the farmers for subsistence. In respect to the international community, Haiti has been readmitted to CARICOM, which could mean increased foreign aid if Preval follows through with the aforementioned policies and others which could benefit the economy and return foreign interest. ...read more.