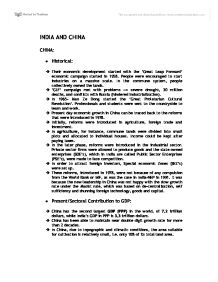 INDIA AND CHINA CHINA: * Historical: ==> Their economic development started with the 'Great Leap Forward' economic campaign started in 1958. People were encouraged to start industries on a massive scale. In the commune system, people collectively owned the lands. ==> 'GLF' campaign met with problems --> severe drought, 30 million deaths, and conflicts with Russia (hindered industrialization). ==> In 1965- Mao Ze Dong started the 'Great Proletarian Cultural Revolution'. Professionals and students were sent to the countryside to learn and work. ==> Present day economic growth in China can be traced back to the reforms that were introduced in 1978. ==> Initially, reforms were introduced in agriculture, foreign trade and investment. ==> In agriculture, for instance, commune lands were divided into small plots and allocated to individual houses. Income could be kept after paying taxes. ==> In the later phase, reforms were introduced in the industrial sector. Private sector firms were allowed to produce goods and the state owned enterprises (SOE's), which in India are called Public Sector Enterprises (PSE's), were made to face competition. ==> In order to attract foreign investors, Special economic Zones (SEZ's) ...read more.

However, this measure has also led to a decline in sex ratio. The sex ratio though, is low and biased against females in both India and China. ==> The fertility rate is low in China and higher in India. ==> Urbanization is high in China and low in India. (28% live in urban areas in India.) ==> However, the problem with use in the HDI is that we need to include 'liberty indicators', like the extent of constitutional protection given to the rights of citizens, independence of judiciary and the rule of law. In China, lack of political freedom and its implications for human rights are major concerns. ==> In the last three decades, China has used the market system, without losing political commitment and succeeded in raising the level of growth, along with alleviation of poverty. INDIA: * Indian Economy at the eve of independence: ==> Stagnant Agriculture- zamindari system; ==> Low level of technology-lack of irrigation facilities, negligible use of fertilizers; ==> Partition-sizeable proportions of fertile lands went to Pakistan; ==> Low industrial growth-India was just an exporter of raw materials. Modern industries in India started only in the second half of the 19th century, but were confined to only cotton and jute. ...read more.

==> The arrival of MNC's has increased competition for domestic manufacturers, who have been forced to shut down. * Infrastructure: ==> Power Supply: Commercial energy makes up 65% of the total energy consumed in India. Inadequate reserves of petroleum. ==> Electricity: Between 2000 and 2012, India needs to add 1 lac megawatts of new capacity, to sustain an annual growth of 7%. However, we have only been able to add 20000 megawatts. There is general public unrest due to high tariffs and prolonged power cuts. Production and Distribution of energy is still under the public sector. ==> Health: Expenditure on the health sector is 5% of the GDP, which is abysmally low. India has 17% of the world's population, but bears a frightening 20% of the global burden of diseases (GBD). Inadequate medical infrastructure in rural areas. 0.36 hospital for every 1 lac people in rural areas, while there are 3.6 hospitals for every 1 lac people in urban areas. The primary health centers in rural areas do not even have basic facilities like X Rays or blood testing facilities. Poorest 20% spend 12% of their income on health care, while the rich spend only 2%, since government hospitals do not have sufficient facilities, the poorer are driven to private hospitals. ...read more.