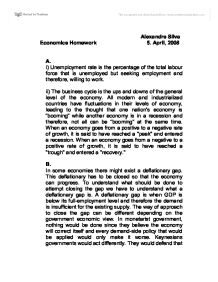 On the other hand, monetary policies would be effective as well. These policies are for example changing the money supplied for the society or the interest rates. In my opinion I would defend the monetarist point of view since I believe that the economy should correct itself and the more amount of money that is injected in the circular flow is going to generate inflation in a bigger percentage than the money injected and in the long-run is going to happen crowding out. C. When an economy is in deflation it means that the prices are constantly decreasing to increase the demand. There are two main reasons why this state of economy creates "unfavorable" conditions to invest. Firstly, since the prices are getting lower constantly whatever we produce today we are going to sell it for a lower price tomorrow. For example, we have a businessperson and he his going to invest 100,000$ in a factory that will produce 10,000 units of a certain product a month which are going to be sold in the market for 10$ each. ...read more.

In Singapore, we have a situation like this where inflation is due to the rise in demand. In a normal case of inflation, inflation would help to decrease unemployment since there is more demand and more things have to be produced by the factories (as shown in the diagram below) and therefore more people will be employed to work in these factories. Singapore is, unfortunately, not a normal case of inflation since they have "already excess productivity capacity" (paragraph 3). This means, in other words, that they have too many people employed than they need. In Singapore's case when there is inflation and more products have to be produced to meet the demand these factories do not need to employ more people, which would obviously decrease the unemployment, since they have too many people to work already in the factories. The inflation is only going to have negative effects since it does not take more people from unemployment and now everything is more expensive (as shown in the diagram below). ...read more.