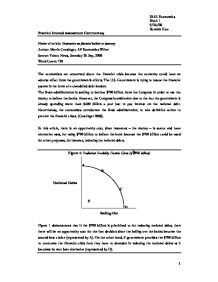 Name of article: Economists see financial bailout as necessary Author: Martin Crutsinger, AP Economics Writer Source: Yahoo News, Saturday 20. Sep, 2008 Word Count: 750 The economists are concerned about the financial crisis because the economy could have an adverse effect from the government's efforts. The U.S. Government is trying to rescue the financial system in the form of a chandelled debt burden. The Bush administration is seeking to borrow $700 billion from the Congress in order to use the money to bailout the banks. However, the Congress is ambivalent due to the fact the government is already spending more than $400 billion a year just to pay interest on the national debt. Nevertheless, the economists corroborate the Bush administration; to take definitive action to prevent the financial crises. (Crustinger 2008). In this article, there is an opportunity cost, since resources - the money - is scarce and have alternative uses, for using $700 billion to bailout the bank because the $700 billion could be used for other purposes, for instance, reducing the national debts. ...read more.

However, if the value of the house price decreases from the value of the original price, it results into problems. Since these consumers cannot handle the interest when the price of the house goes down, as a consequence, they will not be able to pay back the money to the banks. Therefore, the banks have no source of income, and thus are faced with the possibility of becoming bankrupt (as there is a lack of confidence between the consumers and the banks). In addition, the bankruptcy of banks, which provides sub-prime mortgage, gives impact on the other banks like Lehman Bros. The Bush administration has to care about the consumers who have lost their houses and money. Hence, this is the reason why the government is seeking to borrow $700 billion from the Congress to help these people and companies. Bush Administration's solution: However, there are also some possibilities that this solution can fail. ...read more.

And in long terms, the banks will be stabilized, and this will ultimately satisfy the consumers since they can borrow the money from the banks. Nonetheless, ceteris paribus, many economists suggest that this action of bailing out the banks could possibly lead or result into further financial crises because there is no guarantee that the financial crises could be prevented by just providing $700 billion. Regardless of the possible negative consequences, the assumptions presented in the article could be valid due to the fact that the amount of $700 billion could take care of the financial crises. In other words, the $700 billion is sufficient enough to solve the present situation. Therefore, the best alternative will be to use $700 billion to rescue the financial crises, and the government could use the remaining money to alleviate the national debt. Source: Crustinger, Martin. "Economists see financial bailout as necessary." Yahoo! News. Sep 20, 2008. Sep 25, 2008. <http://news.yahoo.com/s/ap/20080920/ap_on_bi_ge/financial_meltdown_ economy;_ylt=AuEfoKbnZD27VMcdNGRZ3jNv24cA> ?? ?? ?? ?? IB SL Economics Block 1 9/26/08 Bonmin Koo Practice Internal Assessment Commentary 1 ...read more.