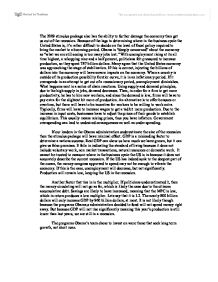 The 2009 stimulus package also has the ability to further damage the economy than get us out of the recession. Because of the lags in determining where in the business cycle the United States is, it's rather difficult to decide on the level of fiscal policy required to bring the market to a booming period. Obama is "deeply concerned" about the economy as "what we are still seeing is too many jobs lost." With unemployment rising at its all time highest, a whopping nine and a half percent, politicians felt pressured to increase production, so they spent 787 billion dollars. Many agree that the United States economy was approaching the stage of stabilization. ...read more.

An alternative is to offer bonuses or overtime, but there will have to be incentive for workers to be willing to work extra. Typically, firms will have to increase wages to get a tad bit more production. Due to the increase in input costs, businesses have to adjust the prices of their goods to establish equilibrium. This usually means raising prices, thus you have inflation. Government overspending can lead to undesired consequences as well as under spending. If our leaders in the Obama administration underestimate the size of the recession then the stimulus package will have minimal effect. GDP is a misleading factor to determine a nations success. Real GDP can show us how much we have grown, but it can give us false premises. ...read more.

If this is the case, unemployment will decrease, but not significantly. Production will remain low, keeping the US in the recession. Another factor that ties in is the multiplier. If politicians underestimated it, then the money circulating will not go as far, which is likely the case due to the citizens accumulative debt. Savings are likely to have increased, meaning that the MPC is low, which in return produces a low multiplier. Lets say that it is 1.2. The nearly 800 billion dollars will only increase GDP by 960 billion dollars, at most. It is not likely though because the programs Obama;s administration decided to fund will not spend money right away. But because GDP will not rise significantly meaning this year's production is still lower than last years, we are still in a recession. The programs Obama's team chose to invest on were those that seek long term growth, not short runn. ...read more.