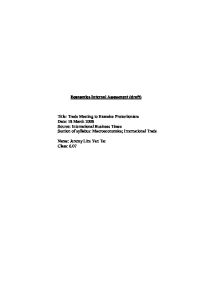 Economics Internal Assessment (draft) Title: Trade Meeting to Examine Protectionism Date: 18 March 2008 Source: International Business Times Section of syllabus: Macroeconomics; International Trade Name: Jeremy Lim Yan Tat Class: 6.07 This article is about the upcoming United Nations Conference on Trade and Development or UNCTAD in short. This conference seeks to boost long-stalled global trade talks and climate change efforts in the developing world, which in turns address the new forms of protectionism in the developed world that hinders the advancement and development of poor nations. The protectionism threatens the ability of the poorest nations to compete in the global market. Protectionism refers to the partial or complete protection of domestic industries from foreign competition in domestic markets. This can be done by setting up trade barriers, examples such as tariffs, quotas, subsidies, exchange control. I shall elaborate on a common trade barrier. Tariffs are taxes levied on products when they cross national boundaries. It can be applied to imports and exports. There are two types of taxes, specific tariff or an ad valorem tariff. The specific tariff refers to a fixed amount of tax per physical unit of imported product. An ad valorem tariff refers to a tax that is expressed as a percentage of value of the commodity. ...read more.

The richer countries are using protectionism with new names and meanings to threaten the poorer nations to compete globally by protecting their own trade and important industries. Anti-dumping or countervailing ideas can be imposed on heavily subsidized imports so as to bring their prices to be more in line with domestic prices. As dumping does not reflect comparative advantage and may damage home industries that will be important in the longer run, it is legitimate and necessary for a country to protect its industries from being wiped out by unfair foreign competition. It is difficult to prove that the imports are subsidized and it can be disguise to protect inefficient industries. Hence these are usually used on the poorer nations in the pretext of dumping. Though there are always reasons to use protectionism for each country's benefit, there is a need to reduce the extent of the policy or even perhaps eliminating the policy for the benefits of the developing countries and in turn increasing the efficiency of production in the world and international trade. The ambition of the conference is to thaw out problems separating countries from a comprehensive global trade pact so that poorer nations could benefit from increased trade and efficient use of the world's limited resources. ...read more.

He did not mention any countries by name, but protectionist sentiment has emerged in the U.S. presidential election. The term "economic patriotism" has mostly been associated with French resistance to foreign takeover attempts of France-based companies. "There are all sorts of new waves of protectionism that might be 'misconsidered' and misdirected at elements from the South," Supachai said. Top of Form He pointed to the irony of such an attitude when developing countries "are being helpful in solving the crises of the North," or rich world, by pumping billions of dollars (euros) into struggling financial institutions such as UBS AG and Citigroup, and solving liquidity problems in the U.S. and European economies. For Supachai, a former Thai commerce minister, the Ghana meeting will be the first he spearheads since a disastrous WTO meeting he presided over in Cancun, Mexico, in 2003. While that get-together collapsed in acrimony, its ambition was much higher to thaw out problems separating countries from a comprehensive global trade pact. Asked if he was glad the Ghana meeting's agenda was more wide-ranging and vague, Supachai said he was not all that uncomfortable with following up on Cancun's legacy. "Cancun should not only remembered for the breakdown," he said. "It should be remembered that the voices of developing countries rose up above others." (Website: http://www.ibtimes.com/articles/20080318/trade-meeting-to-examine-protectionism_1.htm) ...read more.