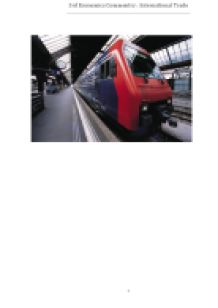 should decrease the real interest rate reassuring a greater number of firms to invest in capital goods and households to fund the consumption of a higher number of durable goods, pushing aggregate demand (AD) to the right (increase) returning the economy of the Eurozone to its full level of employment of output (represented as a shift from to in the right hand side graph). Though usually monetary easing like this should result in inflation, it is unlikely given the European?s large gap in output (illustrated as the distance between and the full employment level of output shown as a dotted line). An increase in AD should result in an increase in output however insignificant inflation as a result of the excess capacity of the factors of production within the European economy. ...read more.

The states of the Eurozone must become more competitive with those of Eastern Europe and Asia if they optimise to economically grow. In the medium-term, the Eurozone nations must exhibit a promise to fiscal limitation and more stable budgets. Eradicating loopholes that permit industries and prosperous consumers to evade paying taxes is imperative for example. In addition, rising the age of retirement, economizing on social welfare programs and raising marginal tax rates on the highest income earners should all visibly communicate the message to investors that these countries are indeed dedicated to fiscal restraint. As a result, their dependency on European Central Bank lending?s will deteriorate and private lenders will once more be keen on buying government bonds from the Eurozone at lower interest rates, permitting constant advancement in the private sector. ________________ [1] The name of the new monetary policy : refer to article ...read more.