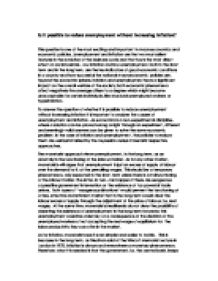 Is it possible to reduce unemployment without increasing inflation

Is it possible to reduce unemployment without increasing inflation? This question is one of the most exciting and important in macroeconomics and economic policies. Unemployment and inflation are the two most salient features in the evolution of the business cycle and that have the most direct effect on social welfare. Low inflation and low unemployment, both in the short term and in the long term, are the key indicators of good economic conditions in a country and how successful the national macroeconomic policies are. Beyond the economic sphere, inflation and unemployment have a significant impact on the overall welfare of the society: both economic phenomena affect negatively the average citizen to a degree which might become unacceptable for certain individuals, like structural unemployed workers or hyperinflation. To answer the question of whether it is possible to reduce unemployment without increasing inflation it is important to analyze the causes of unemployment and inflation. As economics is a non-experimental discipline, where a solution can be proved wrong or right through an experiment, different and seemingly valid answers can be given to solve the same economic problem. ...read more.

Moreover, Keynesians firmly belief that wages -both nominal and real- are sticky downwards, i.e. it just an economic reality that wages do not adjust to the excess of labor supply or unemployment. In other words, the labor market is a special market that cannot be compared to the generally more flexible functioning of the rest of the economy. The key element splitting the view of Keynesians on one hand and monetarist/neoliberals on the other is the degree that the labor market left alone can function to eliminate (involuntary) unemployment. The Keynesian response is indeed negative. And this is the major challenge of macroeconomic policies. Inflation has been seen traditionally by Keynesians as a less relevant macroeconomic problem. There is a concrete traditional Keynesian response to the question of whether it is possible to keep low both unemployment and inflation: the Phillips Curve. A Professor of Economics at the LSE showed in 1957 that there is an inverse relationship between unemployment and nominal wages using data for UK for a long period. Professor Phillips in fact discovered that there was a stable relationship between annual changes in unemployment and in nominal changes. The higher the unemployment rate was, the lower the nominal wages growth. ...read more.

However, there remains as a key difference that the Keynesians do not consider it as long term equilibrium to the extent that there will be still the possibility for including involuntary unemployment, e.g. structural unemployment. In conclusion, during the last couple of decades, it is probably right to say that there has been a convergence between monetarists and Keynesians and both approaches will response to the theme of this essay along a mainly common line of arguments. This also applies to a great extent to what macroeconomic policies can do to bring about both low inflation and low unemployment, or reduce unemployment without increasing inflation. There is now almost a unanimous view that long term inflation can only be achieved by a strict monetary policy which control adequately money supply and interest rates in the economy. At the same time, it is also generally admitted that in the long term low unemployment could be achieved by supply side-type policies which allow the efficient functioning of flexible markets, including the labor market. In the latter one, flexible contracts, low minimum wages, training for structural unemployed workers, good education for young workers, tax policies which favor research and development, ... all these are policies which can and should contribute to low unemployment in the long term while keeping inflation low. ...read more.