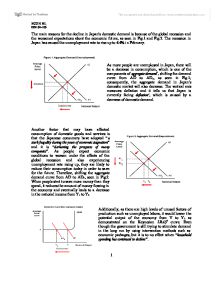 The main reasons for the decline in Japan's domestic demand is because of the global recession and the worsened expectations about the economic future, as seen in Fig.1 and Fig.2. The recession in Japan has caused the unemployment rate to rise up to 4.4% in February. As more people are unemployed in Japan, there will be a decrease in consumption, which is one of the components of aggregate demand1, shifting the demand curve from AD to AD2, as seen in Fig.1; consequently, the aggregate demand in Japan's domestic market will also decrease. The vertical axis measures deflation and it tells us that Japan is currently facing deflation2, which is caused by a decrease of domestic demand. Another factor that may have affected consumption of domestic goods and services is that the Japanese consumers have adopted "a stark frugality during the years of economic stagnation" and it is "darkening the prospects of many companies". ...read more.

Even though the government is still trying to stimulate demand in the long run by using intervention methods such as economic packages, but it is to no effect when "household spending has continued to decline". A combination of all of these factors will put Japan into the position of the trough phase of its typical business cycle. There is a negative output gap, "deflationary gap", where the economy is producing below its potential output. This is due to the unemployment issue that Japan faces and how the Japanese companies are lowering supply in the domestic market when they "just don't see a future in the domestic market". As a result of the overall decline in domestic consumption, local Japanese firms are all not very confident about the future of the economy. ...read more.

In conclusion, the Japanese's economy is failing even "as the government pumps money into the economy"; this shows that the stimulus packages are not effective enough to pull Japan out of the trough phase given the high unemployment and the worsened expectations of the consumers. Additionally, since companies are investing into foreign markets, the aggregate supply in Japan is lowered.i 1. Aggregate demand is the total spending on goods and services in a period of time at a given price level 2. Deflation is the decrease in the general price level of goods and services 3. Aggregate supply is the total amount of goods and services that all industries in the economy will produce at a every given level ECON HL 002162-106 1 ...read more.