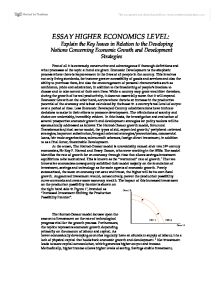 ESSAY HIGHER ECONOMICS LEVEL: Explain the Key Issues in Relation to the Developing Nations Concerning Economic Growth and Development Strategies First of all it is extremely constructive and advantageous if thorough definitions and what processes of the topic at hand are given. Economic Development is the simplistic process where there is improvement in the lives of all people in the country. This involves not only living standards, for instance greater accessibility of goods and services and also the ability to purchase them, but also the encouragement of personal characteristics such as confidence, pride and admiration, in addition to the broadening of people's freedom to choose and to take control of their own lives. While a country may grow wealthier therefore, during the growth of its real productivity, it does not essentially mean that it will expand. Economic Growth on the other hand, occurs where there is an increase in the productive potential of the economy and is best calculated by the boost in a country's real level of output over a period of time. Less Economic Developed Country administrations have intricate decisions to make in their efforts to promote development. The tribulations of scarcity and choice are undeniably, incredibly evident. In this thesis, the investigation and evaluation of several prospective economic growth and development strategies for policy makers will be systematically addressed as follows: The Harrod-Domar growth model, Structural Transformation/dual sector model, the types of aid, export-led growth/ peripheral- oriented strategies, important substitution/integral-oriented strategies/protectionism, commercial loans, fair trade organizations, micro-credit schemes, foreign direct investment, in addition to as a final factor, Sustainable Development. ...read more.

It is a loan, though may be subject to a long period prior to re-payment commencing as a "granted or soft" loan, below market terms. Multilateral aid is by far the most efficient and renowned, as it is when separate countries pay money into one central organization, for example the World Bank, and then establishes who receives the allocated money and for what purpose. There also raises a stark argument on whether the Aid given is legitimate or unsanctioned. The types of aid can come across as certified in which case it is "administered by government or government agencies" 5, or it may be unendorsed, in which case it is "administered by a non-government body, such as a charity." 6 Aid might also be trade related, in that the taxes will only be made available if the receiving country agrees to buy goods or services from the donor nation. "This is called tied aid - the aid is tied to particular contracts i.e. it has strings attached." 7 In the end, successful aid should aim to reduce the dependency of private investment, which may not arrive or will only be found at a high price to the country seeking such funding. The majority of trade generated by developing economies goes to the developed world. The developing countries sporadically trade within themselves as exporting to the more refined markets of the developed world compels them to produce at superlative standards and that makes their goods more globally spirited and cutthroat. ...read more.

15 Many economies now aim for sustainable economic growth as stated before. This means that they are attempting to grow today without damaging the prospects for development for future generations tomorrow. Sustainability has become the new scheme for economists, in relation to developing nations however this very notion tends to be largely ignored, believing that more is better. Some doubt if this is really possible but to achieve it means investing more in such courses of action as: * Recycling * Using alternative methods and resources to generate power etc. * Admitting to both social costs and benefits and accepting that someone has to pay the truce cost of resource allocation Source: Triplea Purely said, economic growth and development is of the essence, a fundamental aspect for every developing nation, because after all when it comes down to the basics, "growth is good", and is treated as the steeping stone as a set view of growth and development throughout multinational economies. There is no qualm that people want to enjoy a better standard of living. In addition, Economic growth is the very aspect that enables us to enjoy a comfortable standard of living. Despite the fact that one must keep in mind those favourable consequences of economic growth such as: employment, opportunities for investment, and the heights of new significant political and communal dimensions. But in relation to developing countries one must not disregard they're current status and the structure of the economy. Adopting these new schemes might not be appropriate and often these countries are furthermore weighed down by the lack of legal framework. ...read more.