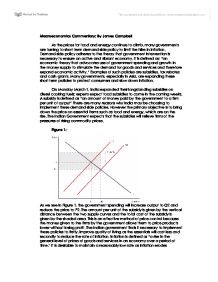 Macroeconomics Commentary: By James Campbell As the prices for food and energy continue to climb, many governments are turning to short-term demand-side policy to limit the hike in inflation. Demand-side policy adheres to the theory that government intervention is necessary to ensure an active and vibrant economy. It is defined as: "an economic theory that advocates use of government spending and growth in the money supply to stimulate the demand for goods and services and therefore expand economic activity." Examples of such policies are subsidies, tax rebates and cash grants. Many governments, especially in Asia, are expanding these short-term policies to protect consumers and slow down inflation. On Monday March 1, India expanded their longstanding subsidies on diesel cooking fuels; experts expect food subsidies to come in the coming weeks. ...read more.

The Indian government finds it necessary to implement these policies to firstly, improve quality of living as the essentials will cost less and secondly to reduce the rate of inflation. Inflation is defined as "a rise in the general level of prices of goods and services in an economy over a period of time." It is desirable to maintain a reasonably low rate as inflation erodes international competitiveness making exports cost more abroad. This can cause a decrease in demand for exports. This would result in less revenue for many firms, and less money coming into the country. Last week in Hong Kong, authorities turned to a different method of price control. This includes waving public-housing rents for two months and providing residents with cash handouts of 6000 Hong Kong dollars (US$770.) ...read more.

However subsidies and handouts let governments avoid more painful moves, such as big interest-rate increases, which many governments fear will slow growth. Frederic Neumann, and economist at HSBC in Hong Kong says, "...subsidies and price controls are counterproductive." He also says that "giving people more money to spend through subsidies and handouts is the last thing governments should be doing when prices are rising." What he means, is that by enable more consumer spending, the governments are increasing aggregate demand. This is known as demand-pull inflation. Which is shown in figure 2 and defined as "when aggregate demand in an economy outpaces aggregate supply" Figure 2 As we see here in figure 2, as demand shifts right, price goes from P1 to P2. This is what Frederic Neumann fears will happen in to the countries that have recently turned to demand side policy. Overall, although handouts and subsidies are an effective short-term fix, which improve quality of life, they may prove costly in the long run. ...read more.